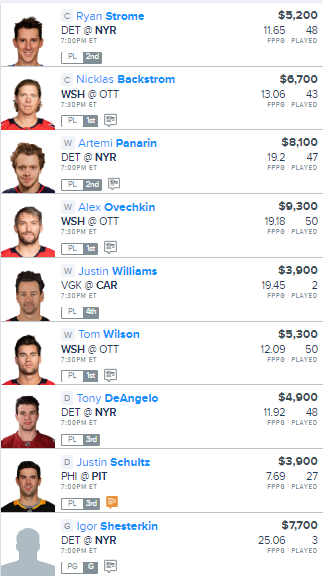 For our lineups tonight, we’re going to have plenty of focus on the New York Rangers & Washington Capitals.

The New York Rangers have arguably the best match-up of the night at home agianst the Detroit Red Wings.

The Rangers, despite only having 50 points on the season, have been decent at home this season, posting a 13-10-2 record and have been averaging 3.48 goals per game.

The Rangers have a great opportunity to improve those numbers as they face a Detroit Red Wings team that comes into this game that currently has posted just a 4-19-1 record on the road while allowing an NHL worst 3.88 goals/game.

For the Rangers we’re going to be going with a 3-man stack of Ryan Strome, Artemi Panarin, & Tony DeAngelo while also putting Igor Shesterkin in net.

The Capitals will be on the road tonight, however, have a great match-up against an Ottawa Senators team that really don’t have any answers for the high powered Capitals offense.

For the Capitals, we’re going to pay up for the top-line of Nicklas Backstrom, Alex Ovechkin, & Tom Wilson

Justin Williams returned to action for the Hurricanes prior to the All-Star break and looked good as in those two games he scored two goals on eight shots. Williams is part of the Carolina power play and just has too much value at $3,900 to pass up on.

Rounding out the team, we’re also getting some vale with the Penguins Justin Schultz who will be back in the lineup tonight after missing about six weeks of action due to injury. Schultz was seeing about 20 minutes of action prior to getting injured and as I like the Penguins match-up at home agianst the Flyers tonight, I think he has nice value at just $3,600.