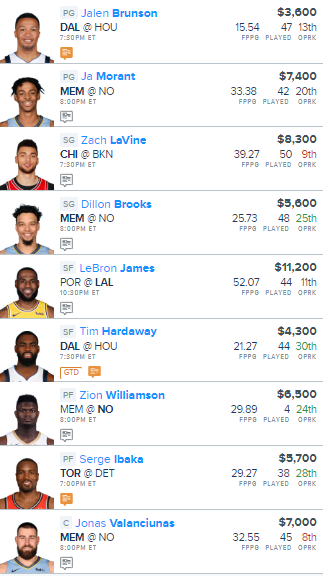 If you were like me tonight, your first thoughts probably were “Who from Dallas are we going to go with tonight knowing that Luka Doncic is out?”.

Initially, it seems that Kristaps Porzingis would be an easy answer, especially as his price is at just $6,400, however, the Mavericks have been taking it easy on their injury prone big man and it wasn’t encouraging in just 20 minutes last game, Porzingis was only able to put up 9 points, 3 rebounds, and an assist.

Instead of Porzingis, I’m going to go what should be the chalkiest play of the night in Jalen Brunson to go along with Tim Hardaway Jr.

I was tempted to go with a more risky play in J.J. Barea or Seth Curry, however, Brunson was seeing 30+ minutes per game when Doncic was out earlier this season and even if this game become a blowout, I think Brunson will easily hit value at his $3,600 price tag.

We’ll have to keep an eye on Hardaway Jr’s status as he is currently probably, however, if he goes, I can see 30+ minutes from the veteran and I think you’ll see him putting up 15-20 shots tonight.

We have a 2-man stack of Memphis Grizzlies as they have one of the better match-ups agianst the New Orleans Pelicans. The Over/Under currently for this match-up is at an incredible 241.5 points so it’s important you have plenty of action in this match-up.

For the Grizzlies, we’re going to pay up for two of their main offensive options in Ja Morant, Dillon Brooks and Jonas Valanciunas.

Staying in this match-up, we’re going to pay up for Zion Williamson as the upside in this match-up is incredible and the Grizzlies should struggle even more agianst Williamson with Jalen Jackson Jr. not available. Williamson has been incredibly consistent in his four games this season (26.3+ FanDuel points in all four games) and as he is seeing closer to 30 minutes over the last two games, I like Williamson at his price point tonight.

We’re going to be paying up for both Chicago’s Zach LaVine and the Lakers LeBron James.

Rounding out our lineups, we’re going back to Toronto’s Serge Ibaka who has great value at just $5,700 in a good match-up against Detroit, especially considering that Toronto will once again be without Rondae Hollis-Jefferson & Marc Gasol.