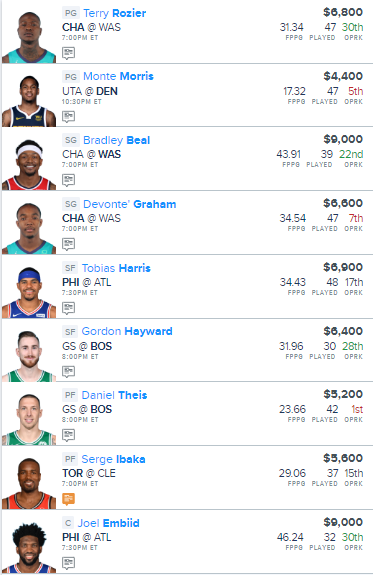 Kicking off our lineup today, we’re going to be going with a duo of Charlotte Hornets in Terry Rozier & Devonte’ Graham in their outstanding match-up against the Washington Wizards.

FanDuel has both Rozier & Graham reasonably priced (both under $7,000) and you couldn’t ask for a better match-up against a Wizards team that struggled giving up points and play at one of the fastest paces in the league.

Staying in this match-up,

At our other PG spot, I’m going to go with the value in Denver’s Monte Morris in his match-up agianst the Utah Jazz. Utah is playing their 3 game in 4 days, including being on the 2nd half of a back-to-back which should allow Denver to put up some decent points tonight. Morris has seen 33 and 35 minutes of his last two games and if he sees that type of time again, I think he goes for 30+ FanDuel points tonight.

We have a 2-man stack of Boston Celtics in both Gordon Hayward & Daniel Theis in their match-up against the Golden State Warriors.

Jayson Tatum will be back for the Celtics but will be on a minutes restriction tonight so I don’t mind going with Hayward. With both Enes Kanter & Robert Williams out for the Celtics, Theis continues to be a solid play at just $5,200, especially as he is averaging 33.25 FanDuel points per game over his last four games.

We’re going with Toronto’s Serge Ibaka who is almost a must play tonight at $5,600 with both Marc Gasol & Rondae Hollis-Jefferson out.

Rounding out our team, we’re going with both Tobias Harris & Joel Embiid of the Philadelphia 76ers in there match-up against the Atlanta Hawks.

I originally had Ben Simmons, however, I’m a bit hesitant as due to the fact he is battling an illness, I just don’t want to invest so much salary as if the 76ers get out to a comfortable lead, I can see them taking it easy with Simmons minutes tonight.

Harris has been outstanding this season is probably the best play at SF tonight and although there is some nice value at center, no way am I passing up on Joel Embiid at just $9,000.