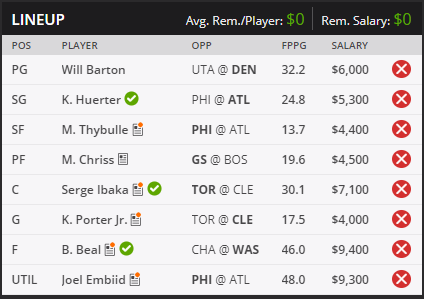 At PG, we’re going to go with Denver’s Will Barton in his match-up against the Utah Jazz. The Jazz are usually a tough match-up, however, Utah is playing their 3 game in 4 days, including being on the 2nd half of a back-to-back on the road. Barton has seen his price drop considerably over the last two weeks, but I think this is the moment to start getting him back in your lineups, as he should even see more usage with Gary Harris already listed out tonight.

We’re going to pay up for the Wizards Bradley Beal who is averaging 56 DraftKings points in his last four games and should seeing 35+ minutes if this game is competitive.

We have a 2-man stack of Philadelphia 76ers in Matisse Thybulle & Joel Embiid in their great road match-up agianst the Atlanta Hawks.

Atlanta turns the ball over a bunch which should lead to Thybulle, who will get extra minutes with both Richardson & Horford out, to have a big day in the defensive categories.

As for Embiid, he just has too much value at just $9,300 agianst a banged up Atlanta frontcourt.

I think Kevin Huerter has some nice value for the Hawks tonight as they’ll need Huerter to have a nice game if the Hawks plan on keeping their game competitive agianst the 76ers.

Marquese Chriss saw 31 minutes in his last game agianst the 76ers and with Willie Cauley-Stein no longer with the team, I think Chriss sees a similar amount of action tonight and has great value at just $4,500.

We’re going with Toronto’s Serge Ibaka who is almost a solid play tonight at $7,100 with both Marc Gasol & Rondae Hollis-Jefferson out.

Rounding out our team, we’re staying in the TOR/CLE match-up and going with Kevin Porter Jr. Porter Jr. continues to see more and more minutes and it was announced today that he will no longer have a minutes restriction going forward. I think he sees around 25 minutes today and should be able to hit value at just $4,000.