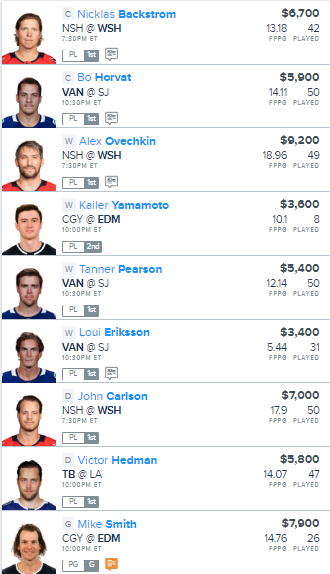 Kicking off our lineup tonight, we’re going to be taking a look at the Washington Capitals in their home match-up against the Nashville Predators tonight.

Washington comes into this match-up with the best record in the NHL (34-11-5) and a large part of their success has been due to their outstanding offense that currently ranks 5th in goals/game (3.56).

We like the Capitals match-up against the Nashville Predators tonight who have lost three of their last four games while allowing 3.5 goals in that span. Nashville has really struggled with their goal tending this season and gets a nice match-up against Juuse Saros who comes into this game with a 2.78 GAA & .895 SV% and is coming off a tough game against Anaheim in which he allowed 4 goals in just 27 shots.

For the Capitals, we’re going to go with a 3-man stack of Nicklas Backstrom, Alex Ovechkin, and John Carlson.

For our value stack tonight, we’re going to look at the Vancouver Canucks in their road match-up agianst the San Jose Sharks.

Vancouver has been playing outstanding hockey since mid-December which has helped them take the lead in the Pacific Division. Vancouver comes into this game ranked 10th in goals/game (3.24).

The match-up is a decent one against the Sharks as San Jose currently ranks 28th in goals allowed/game (3.29) and recently gave up four goals to this same Canucks team in a defeat about two weeks ago.

For the Canucks, we’re going with a 3-man stack of Bo Horvat, Tanner Pearson, and Loui Eriksson.

We’re getting some value at our last wing spot with Edmonton’s Kailer Yamamoto who has topped 11.2 FanDuel points in 5 of his 8 games this season and as has been on the Oilers 2nd line, he should continue to see some solid opportunities.

With our other defenseman spot, we’re paying up for Tampa Bay’s Victor Hedman in his great match-up agianst the Los Angeles Kings. Tampa Bay is going to be a popular stack tonight and I wanted to at least get some action with the Lighting.

In net, we’re going with Edmonton’s Mike Smith who has won five straight starts which included tough match-up on the road agianst both Toronto & Boston.