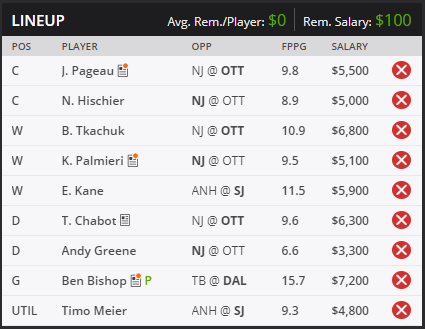 Happy Monday! Hope everyone enjoyed the NHL All-Star Game this past weekend!

For our lineup tonight, we’re going to get heavy exposure to both the New Jersey Devils and Ottawa Senators in their match-up in Ottawa tonight.

Both the Devils & Senators have implied scoring totals that are over 3.0 tonight as both defenses have really struggled this season.

New Jersey comes into this game ranked 30th in goals allowed/game (3.52) and really struggled going into the All-Star break as the Devils averaged 5.7 goals/game in their last three games. New Jersey ranks 19th in shots allowed per game (31.7) and 17th in PK% (79.6%).

For the Devils, we’re going with both Nico Hischier, Kyle Palmieri, and Andy Greene.

Ottawa comes into this match-up ranked 29th in goals allowed/game (3.33) and have lost 9 of their last 10 games. Ottawa has played well at home this season, however, the Senators rank just 29th in shots allowed/game and allowed the Devils to put up 4 goals against them in their previous game in late December.

For the Senators, we’re going with a 3-man stack of Jean-Gabriel Pageau, Brady Tkachuk, and Thomas Chabot.

For the Sharks, we’re getting some nice value with both Timo Meier & Evander Kane.

In net, we’re going to go with some nice value in the Dallas Stars Ben Bishop despite his tough match-up against the Tampa Bay Lighting. Bishop has been outstanding at home this season, posting an 11-6-2 record with an impressive 1.91 GAA & .938 save percentage and I think he is going to be extra motivated going up agianst his former team tonight.