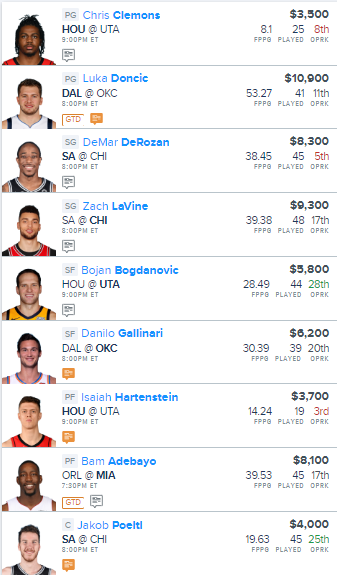 Kicking off our lineup tonight, we’re going to go to be taking a look at the Houston Rockets as they’ll bring a bunch of value tonight in their match-up against the Utah Jazz.

At this point, we know Russell Westbrook is out and it currently looks that both James Harden & Clint Capela are looking doubtful. Due to this, basically everybody on the Rockets that will be taking the court tonight should have so solid value.

At the same however, the Rockets due have a tough match-up agianst the Utah Jazz on the road and I don’t want to overextend myself with the Rockets so I’m just going with a 2-man stack of both Chris Clemons & Isaiah Hartenstein.

Clemons has no issue putting up shots when he has the opportunity this season and as he did see over 33 minutes earlier this season when both Westbrook & Harden and put up a solid 32.9 FanDuel point performance, he is my choice in the Rockets backcourt tonight.

Staying in this match-up, we’re going to get some nice value with Utah’s Bojan Bogdanovic. Bogdanovic has had a great first season with the Jazz, averaging 21.1 ppg, 4.1 rpg, & 2.0 apg and as the Rockets have struggled against opposing SF’s all season, I like his value at a price under $6,000.

With the value that we’re getting on tonight’s slate, we’re paying for a few starts and it starts with Luka Doncic of the Mavericks in his match-up agianst the Oklahoma City Thunder. Doncic has 70+ FanDuel point upside whenever he steps on the court and I expect a triple-double from him tonight.

We have Danilo Gallinari of the Oklahoma City Thunder tonight as I expect him to see a bit higher usage with Chris Paul unavailable. Gallinari has played well as of late, averaging 35.6 FanDuel points in his last 4 games and I expect about the same production from the sharpshooter tonight.

We’re paying up for Miami’s Bam Adebayo who although is a GTD, is listed as probable. Miami has a ton of players questionable tonight and as I expect one or two of them to miss this game, I think Adebayo gets some extra opportunities on the offensive end tonight.

Rounding out our team, we’re getting some decent exposure in the SA/CHI game.

San Antonio will be without LaMarcus Aldridge which makes both DeMar DeRozan & Jakob Poeltl solid plays.

For the Bulls, we’re paying up for Zach LaVine who is coming off posted performances of 67 & 73.7 FanDuel points over his last five games and should have no problem getting to the basket agianst this Spurs team.