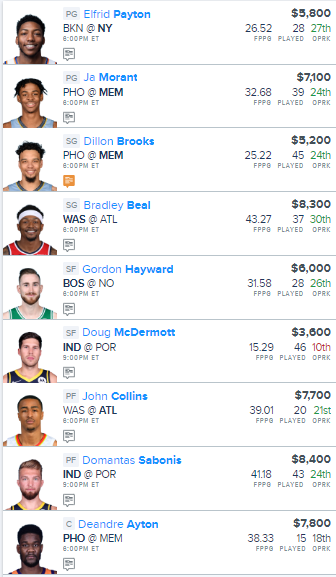 Incredibly tragic news with the passing of NBA legend Kobe Bryant and the others that passed away earlier today. One of the greatest that has ever played the game. My thoughts and prayers go out to his family.

We have a 6-game NBA Slate that starts at 6:00pm tonight and let’s take a look at our FanDuel “Main Slate” lineup!

Kicking off our lineup, we’re going to be taking a look at the WAS/ATL game tonight that has an incredible 240.5 O/U.

As much as I can’t blame going with a complete game stack in this match-up, especially as its projected to be close with Atlanta favored by just two points, I do like some of the other match-ups tonight so in the end, we’re just going to pay up for Washington’s Bradley Beal & Atlanta’s John Collins.

We have a 2-man stack of the Memphis Grizzlies Ja Morant & Dillon Brooks in their home match-up against the Phoenix Suns.

I think Morant is in line for a monster game in this match-up as I just don’t see anyone in the Suns backcourt being able to slow him down and I really like Brooks tonight as Jaw Crowder is doubtful and Brooks generally sees a bump in usage rate when Crowder has been unavailable this season.

Staying in this match-up, we’re going to pay up for the Suns Deandre Ayton who although has failed to crack 30 FanDuel points in each of his last two outings, still has some of the best upside at the center position tonight in this match-up.

We also have 2-man stack of Indiana Pacers in their road match-up agianst the Portland Trailblazers.

Indiana will be without Malcom Brogdon & Myles Turner tonight which should mean Domantas Sabonis should have a monster night tonight in front of his hometown crowd. We’re also going to get some nice value with Doug McDermott who should see around 25 minutes tonight and is coming off an impressive 29.9 FanDuel performance on Friday.

Elfrid Payton has put up at least 32.7 FanDuel points in each of his last four games and with another good match-up against the Brooklyn Nets tonight, I think he has great value at just $5,800.

Rounding out our team will be Gordon Hayward of the Boston Celtics. Jayson Tatum has already been ruled out for the Celtics tonight which makes Hayward a solid play on FanDuel where is price tag is an affordable $6,000 and also has a great match-up against the New Orleans Pelicans.

The pick in this article is the opinion of the writer, not a Pick Dawgz site consensus.
Previous Pick
DFS Lineups Will Be Back Tomorrow, 1/26/20
Next Pick
DFS - NHL - FanDuel - Main Slate Lineup - 1/27/20