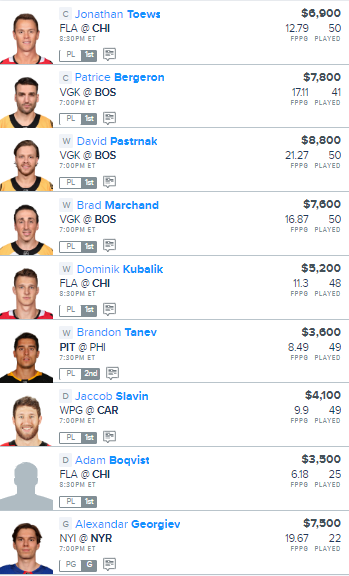 Kicking off our lineup tonight, we’re going to pay up for a 3-man stack of Boston Bruins in their home match-up agianst Vegas Knights.

The Bruins have been phenomenal at home his season, posting a 16-2-9 record while averaging 3.3 goals per game. Boston has been great at scoring quickly on the power play this season and currently rank 3rd in PP% at 26.3%.

Vegas has been about league average in terms of goals allowed per game (3.04) and haven’t been playing their best hockey as of late, losing 5 of their las 6 games while allowing an average of 3.83 goals/game in that span.

For the Bruins, we’re going to pay up for both Patrice Bergeron, David Pastrnak & Brad Marchand.

We also have a 3-man stack of Chicago Blackhawks in their match-up against the Florida Panthers who are on a 2nd half of a back-to-back and have allowed an average of 3.41 goals/game on the road this season.

For the Blackhawks, we’re going to pay up for Jonathan Toews, who is averaging 23.1 FanDuel points per game over his last six games, while also getting some value in Dominik Kubalik & Adam Boqvist.

I like the value that Pittsburgh’s Brandon Tanev brings to the table at just $3,600.

At our 2nd defenseman spot, we’re going to go with Carolina’s Jaccob Slavin who is now skating with the top power play unit of the Hurricanes with the injury to Dougie Hamilton.

In net, we’re going to take a chance with the Rangers Alexandar Georgiev who has had the Islanders number as of late, picking up wins against the Islanders in his last two starts.