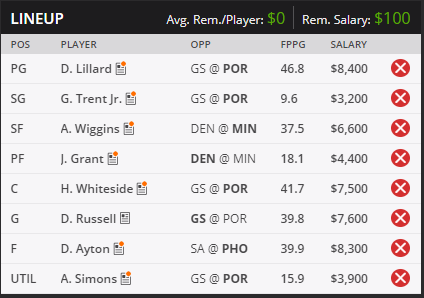 Kicking off our lineup tonight, we’re going to go with a 3-man stack of Portland Trailblazers in their great home match-up against the Golden State Warriors.

As we discussed on Saturday, Portland is pretty much rolling with an 8-man squad right now which means some major minutes for everyone.

For the Trailblazers, we’re going to go to pay up for both Damian Lillard & Hassan Whiteside while getting some nice value with Gary Trent & Anfernee Simons.

Both Lillard & Whiteside should see major usage tonight as the main two options on offense.

As I want the Golden State Warriors to keep this one competitive with how much exposure I have to the Portland Trailblazers, I’m going to pay up for D’Angelo Russell. Russell has been playing better as of late, topping 43.75 DraftKings points in three of his last four games and I expect another big game from Russell tonight.

Andrew Wiggins put up an impressive triple-double in his last outing against the Raptors and at $6,600, I think he has some nice value knowing that he is going to see 30 minutes and put up 15-20 shots.

Staying in this match-up, I’m going with some nice value in Jerami Grant who should continue to hit value as he is seeing about 30 minutes per game and still is priced at a reasonable $4,400. Grant has some upside with his ability to rack up steals and blocks and in what should be a fast-paced game at Minnesota, I think he can get us 30 DraftKings point tonight.

Rounding out our team, we’re going with Deandre Ayton in his plus match-up against the San Antonio Spurs. Ayton is coming off performances of 59.75 & 52.25 DraftKings points over his last two games and I expect another strong performance against a Spurs team that has no one in the frontcourt that can match-up up him defensively.