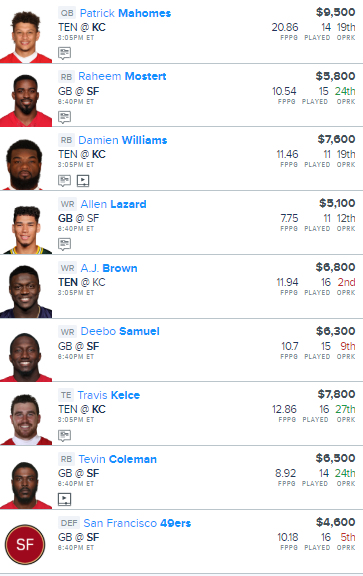 Let’s take a look at our NFL FanDuel lineup for the “Main Slate” slate that starts at 3:05pm!

We’re kicking off our lineups today with a 3-man stack of Kansas City Chiefs and going to pay up for their main playmakers in Patrick Mahomes, Damien Williams, & Travis Kelce.

We saw how explosive the Kansas City offense was last week once they got rolling against the Houston Texans and it was largely due to the Mahomes, Williams, & Kelce trio.

All three of these players are demanding a large part of salary, but I think it’s hard to fade any of these three in today home match-up.

For Tennessee, I’m going to take a risk and not pay up for Derrick Henry as although we could make it work, I just don’t want to be spread out that thin after paying $9,500 for Mahomes.

Henry will probably put up some numbers, however, you have to imagine that Kansas City is going to have 8 men on the line for the majority of the game and will do everything in their power to limit Henry.

As Kansas City will be using the majority of their resources to slow down Henry, I think it opens up an opportunity for A.J. Brown to have a big game. Tennessee is most likely going to be playing from behind and will have to throw it more than we’ve seen in the last two weeks. Brown become the main target for Ryan Tannehill at the end of the surpassing 100 receiving yards in three of the last four games of the regular season and I see him breaking off a big play this afternoon.

We have a 4-man stack of San Francisco 49ers as I like their changes to completely dominate the Green Bay Packers at home this afternoon.

We all know the 49ers love to run the football and we should see plenty of opportunities for both Mostert & Coleman today as I expect the 49ers to be playing from a lead and for the fact that the weak point of the Green Bay defense this season has been agianst the run. I like stacking both Mostert & Coleman as I think that will be a unique stack today and help create some separation from other teams.

Deebo Samuel has slowly become the main WR threat for Jimmy Garoppolo and the 49ers passing attack and as the 49ers have done a nice job getting Samuel some rushes, I think he has some great value at his price.

Green Bay has really struggled on the west coast this season, as they lost by a 37-8 margin to the 49ers and 26-11 margin to the Chargers and as I just don’t think Aaron Rodgers will be able to carry the Packers in this one, I think the 49ers defense is by far the best option today.

Rounding out our team, we’re going to go with one Green Bay Packer in WR Allen Lazard. San Francisco will heavily focus on slowing down both Aaron Jones & DaVante Adams and as I expect the Packers will need to throw a bunch in this one to try and keep up with the 49ers, I think there will be some solid opportunity for Lazard to make a big play or two.