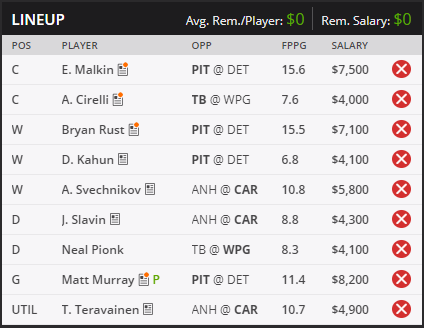 For our lineup tonight, we’re going to be focusing heavy on both the Pittsburgh Penguins & Carolina Hurricanes.

Pittsburgh has the best match-up on the short slate as they get a road match-up agianst the Detroit Red Wings who come in with an NHL worst 27 points (12-32-3) while also ranking dead last in goals allowed/game at 3.87.

For the Penguins we’re going to be spending up for Evgeni Malkin, Bryan Rust, & Dominik Kahun.

Carolina has a decent match-up against the Anaheim Ducks tonight and you always have to like their changes at home where the Hurricanes have posted a 15-8-0 record on the year.

Anaheim has struggled a bit this season and although their troubles on offensive have been more noticeable, the Ducks haven’t been great on the defensive end as they currently rank just 22nd in goals allowed/game at 3.15.

For the Hurricanes, we’re going to pay up for both Andrei Svechnikov & Teuvo Teravainen while getting some nice value with defenseman Jaccob Slavin who should see an increased role with Dougie Hamilton going down with a broken leg last night.

Cirelli has been seeing over 20 minutes of ice time as of late and is solid value option as he is on the 2nd line with Steven Stamkos.

Pionk has seen 25+ minutes of ice time a game and although he isn’t much of a goal scorer, you have to like the fact that he is on the top power play line of Jets and has 26 assists on the season.

In net, we’re going to go with Pittsburgh’s Matt Murray as I just don’t see the Penguins having a hard time picking up a win in Detroit tonight.