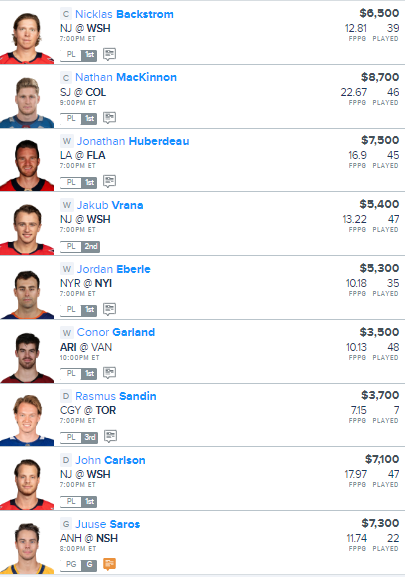 I’m keeping this one pretty short tonight as I need some additional time to complete our NBA lineups!

With a large slate, we’re going to spread out our team a bit tonight with the most focus on the Washington Capitals match-up against the New Jersey Devils.

For the Capitals, we’re going to pay up for Nicklas Backstrom & John Carlson while getting some nice value with Jakub Vrana.

At our other Center position, we’re going to pay up for Colorado’s Nathan Mackinnon as we like his home match-up agianst the San Jose Sharks.

Florida has one of the better match-ups on the slate as they are at home against a below average Los Angeles Kings team. We’re going to pay up for Jonathan Huberdeau who comes into this game with an impressive 18 goals & 43 assists on the season.

Rounding out our players on the wing, we’re going with some nice value in the Islanders Jordan Eberle and the Coyotes Conor Garland.

Both Eberle & Garland are averaging better than 20 FanDuel points per game over their last two games and as both should see solid minutes as part of their respective teams top line, I think they are both solid plays tonight.

Toronto will be without Morgan Rielly for about two months which opens up a nice opportunity for Rasmus Sandin who in his first game since October, saw 16 minutes of action and was able to register two assists & two shots on goal. Sandin should be a major part of the rotation for the Maple Leafs for the foreseeable future and has great value at just $3,700.

In net, we’re going with Nashville’s Juuse Saros who is coming of his best game of the season against the Winnipeg Jets (28 saves, shutout) and I like him to continue his success at home agianst an Anaheim Ducks team that has struggled offensively this season.