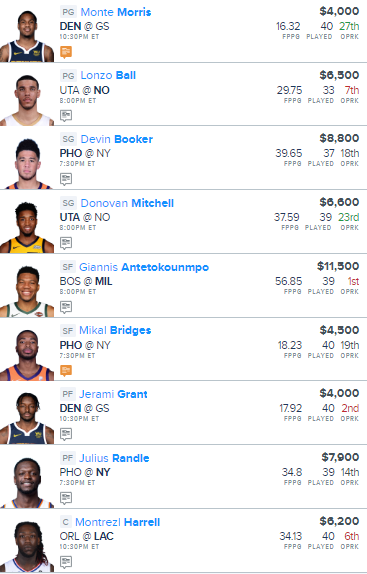 Kicking off our lineup tonight, we’re going to start with some value with the Denver Nuggets in their road match-up agianst the Golden State Warriors.

Denver will be without Jamal Murray, Garry Harris, and Paul Millsap tonight so there is some great opportunity for some value with the Nuggets in a plus match-up.

For the Nuggets, we’re going get value with both Monte Morris & Jerami Grant.

Lonzo Ball has been outstanding as of late as over his last 8 games, Ball is averaging 43.2 FanDuel points per game. Ball is a threat for a triple-double on any given night and although the match-up is less than ideal agianst the Utah Jazz, Ball and the Pelicans still have a solid implied total of 110.5.

Staying in this match-up, we’re going with Donovan Mitchell of the Utah Jazz. Mitchell hasn’t been outstanding this season, however, with a fast paced match-up against the Pelicans and for the fact his price as dropped to just $6,600, I think Mitchell will be a popular play tonight.

We have a 2-man stack of Phoenix Suns in Devin Booker & Mikal Bridges in their match-up agianst the New York Knicks at Madison Square Garden.

Booker average an impressive stat line of 39.5 points, 6.0 rebounds, 3.0 assists, & 2.0 steals against the Knicks in his two games against them last year and as he scored at least 41.1 FanDuel points in 9 of his last 10 games, I think he has 60+ FanDuel point upside tonight.

We get some solid value with Bridges who should be starting tonight as Kelly Oubre Jr. is out with a concussion. Bridges registered 39.6 FanDuel points against the hawks on Tuesday and as he should see 30-35 minutes in a good match-up against a Knicks team that his less than average agianst SF’s, I think he has some of the best value on the entire slate tonight.

Staying in this match-up, we’re going to pay up for the Knicks Julius Randle who since returning from his 2-game absence, has posted games of 43.5 & 46.6 Fanduel points.

Milwaukee suffered one of their few losses to the Boston Celtics earlier this season and I think Giannis Antetokounmpo is going to make sure that doesn’t happen again tonight. Antetokounmpo put up a ridiculous 55.8 FanDuel points (37 points, 9 rebounds, 4 assists, 1 block) in just 21 minutes on Tuesday and if this game stays close, I think Antetokounmpo could get 70+ FanDuel points tonight.

Rounding out our team, we’re going to go with the Clippers Montrezl Harrell in his match-up against the Orlando Magic. Harrell should see around 30 minutes tonight and although he can be a bit inconsistent, he has solid upside at his price ($6,200).