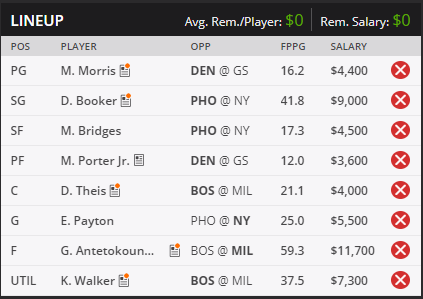 Kicking off our lineup tonight, we’re going to start with some value with the Denver Nuggets in their road match-up agianst the Golden State Warriors.

Denver will be without Jamal Murray, Garry Harris, and Paul Millsap tonight so there is some great opportunity for some value with the Nuggets in a plus match-up.

For the Nuggets, we’re going get value with both Monte Morris & Michael Porter Jr.

Lonzo Ball has been outstanding as of late as over his last 8 games, Ball is averaging 43.2 FanDuel points per game. Ball is a threat for a triple-double on any given night and although the match-up is less than ideal agianst the Utah Jazz, Ball and the Pelicans still have a solid implied total of 110.5.

We have a 2-man stack of Phoenix Suns in Devin Booker & Mikal Bridges in their match-up agianst the New York Knicks at Madison Square Garden.

Booker average an impressive stat line of 39.5 points, 6.0 rebounds, 3.0 assists, & 2.0 steals against the Knicks in his two games against them last year and as he scored at least 41.75 DraftKings points in 9 of his last 10 games, I think he has 60+ DraftKings point upside tonight.

We get some solid value with Bridges who should be starting tonight as Kelly Oubre Jr. is out with a concussion. Bridges registered 39.6 FanDuel points against the hawks on Tuesday and as he should see 30-35 minutes in a good match-up against a Knicks team that his less than average agianst SF’s, I think he has some of the best value on the entire slate tonight.

Staying in this match-up, we’re going with the Knicks Elfrid Payton as he takes on his former team, the Phoenix Suns. Payton put up a solid stat line of 15 points, 5 rebounds, & 6 assists in 32 minutes agianst the Suns earlier this season and as he does have triple-double upside, I think he has great value at $5,500.

Milwaukee suffered one of their few losses to the Boston Celtics earlier this season and I think Giannis Antetokounmpo is going to make sure that doesn’t happen again tonight. Antetokounmpo put up a ridiculous 55.8 FanDuel points (37 points, 9 rebounds, 4 assists, 1 block) in just 21 minutes on Tuesday and if this game stays close, I think Antetokounmpo could get 70+ FanDuel points tonight.

Rounding out our team, as I’m hoping the Celtics keep the game close so we see 35-40 minutes of Antetokounmpo, I’m going to go with a 2-man stack of Celtics in Kemba Walker & Daniel Theis.

Walker struggled last night against Detroit, however, the Bucks haven’t been great against opposing PG’s and the Celtics will need Walker to have a big offensive night with Jaylen Brown out.

Theis missed Monday’s game, but was back in solid form yesterday, logging 28 minutes and going for an impressive 30.25 DraftKings performance. Theis is underpriced at just $4,000 and I think he should hit 5x value tonight.