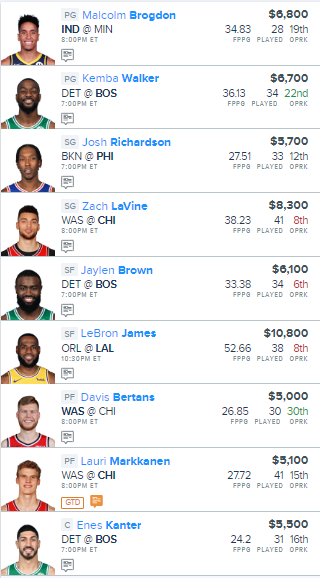 Kicking off our lineup tonight, we’re going to be going with a 3-man stack of the Boston Celtics.

Boston has already ruled out Jayson Tatum tonight which opens up some solid usage from other members of the starting five who are all reasonably priced.

For our other PG spot, we’re going to be going with Malcolm Brogdon who in my opinion is extremely under priced at $6,800. Brogdon saw his price drop as he has been injured since late December, however, he reminded us of how well he played this season on Monday as he saw 33 minutes and put up an impressive 44.9 FanDuel point performance.

We have a 2-man stack of Chicago Bulls in Zach LaVine & Lauri Markkanen in their great match-up against the Washington Wizards.

Lavine has been outstanding as of late, averaging 46.7 FanDuel points over his last seven games and he certainly has 50+ upside tonight in this match-up.

Markkanen has had a disappointing season, however, has been seeing around 30 minutes a game as of late and as he has shown 40+ FanDuel point upside, he is worth the chance in this match-up with a price tag of just $5,100.

Staying in this match-up, I’m going with Washington’s Davis Bertans who also comes in with some nice value at just $5,000. Bertans was averaging 32.6 FanDuel points per game before missing 9 games due to insure and between the fact that the Wizards frontcourt is still banged up and that he saw 25 minutes of action against Utah on Sunday, I think he has some nice value.

We needed to get some exposure to the Philadelphia 76ers with Joel Embiid out and I think the best value is with Josh Richardson who has topped 31.3 FanDuel points in three of his last four games.

Rounding out our team, we’re going to pay up for LeBron James who is always a solid option and has even more value with Anthony Davis not available.