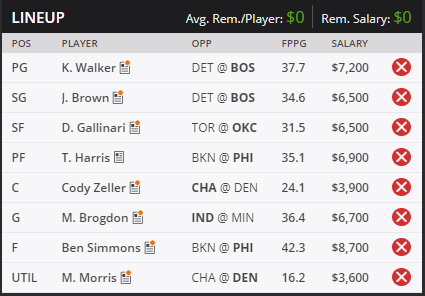 Kicking off our lineup tonight, we’re going to be going with a 2-man stack of the Boston Celtics.

Boston has already ruled out Jayson Tatum tonight which opens up some solid usage from other members of the starting five who are all reasonably priced.

For the Celtics, we’re going to go with Kemba Walker & Jaylen Brown.

We’re also going with a 2-man stack of Philadelphia 76ers as they have a decent match-up against the Brooklyn Nets and will be without Joel Embiid.

For the 76ers, we’re going with Ben Simmons & Tobias Harris.

Danilo Gallinari has a decent match-up against the Toronto Raptors and I’m hoping that he can continue his hot shooting as over his last three games, Gallinari is shooting 57.5% from the field and 52.6% from beyond the arc.

We’re going with Malcolm Brogdon who in my opinion is extremely under priced at $6,700. Brogdon saw his price drop as he has been injured since late December, however, he reminded us of how well he played this season on Monday as he saw 33 minutes and put up an impressive 46.25 DraftKings point performance.

We’re going to get some value in the CHA/DEN game as we’re going to round out our team with the Hornets Cody Zeller and the Nuggets Monte Morris.

Zeller reclaimed his starting position on Monday night and as I expect him to see between 25-30 minutes against  Nikola Jokic tonight, he has too much value to pass up on at just $3,900.

I’m going with Monte Morris as both Jamal Murray & Garry Harris are currently questionable to play tonight. Murray doesn’t miss much action, however, head coach Michael Malone said he would be surprised if Murray played tonight. Denver also said, they would be cautious with Gary Harris so I think there is a good possibility that either one or both our out tonight.

Even with both Murray and Harris healthy, Morris has topped 20+ DraftKings points in three of his last four games and as I think he’ll have a bigger role tonight, I think he is easily going to crush value.