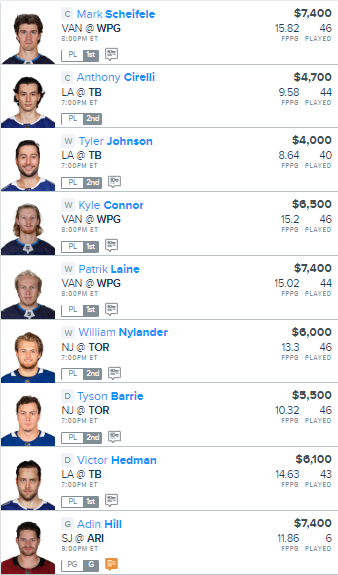 Winnipeg has struggled a bit at home this season, however, I love the match-up agianst the Vancouver Canucks who come into this match-up with just a 11-12-1 record on the road and are allowing an average of 3.09 goals/game (ranked 17th in the NHL). Vancouver allowed a ton of shots as they ranked 5th in shots allowed (32.8 shots per game) and the Canucks didn’t look great in this same match-up earlier this season, as they Canucks suffered a 4-1 loss to the Jets in November.

For the Jets, we’re going to pay up for the top line of Mark Scheifele, Kyle Conner, & Patrik Laine.

Toronto is going to be a popular stacking option tonight and although we’re not paying up for the top line so we can create some separation from the other entries we still want some exposure to the Maple Leafs in their home match-up against the New Jersey Devils.

For the Maple Leafs, we’re going to go with William Nylander & Tyson Barrie who are both a part of the top power play unit for Toronto.

We’re going with some decent value with the Tampa Bay Lighting in their home match-up against the Los Angeles Kings.

For the Lighting, we’re going to pay-up for defenseman Victor Hedman while getting some nice value in 2nd liners Anthony Cirelli & Tyler Johnson who are both on the 2nd Power Play unit for Tampa Bay.

In net, we’re  going to go with some value in Arizona’s Adin Hill who has a nice home match-up agianst the San Jose Sharks who have just an 8-11-3 record on the road and rank 26th in goals scored per game (2.64).

The pick in this article is the opinion of the writer, not a Pick Dawgz site consensus.
Previous Pick
NBA & NHL DFS Lineups Will Return Tomorrow, 1/14/20
Next Pick
DFS - NBA - FanDuel - Main Slate Lineup - 1/14/20