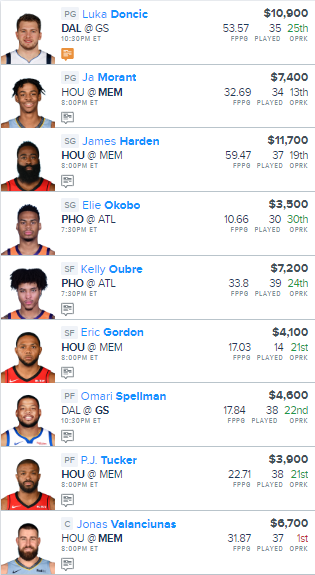 We’re going to start off our lineups tonight by getting heavy exposure to the HOU/MEM game which has an incredible O/U of 240.5.

Houston will be without Russell Westbrook tonight so without any hesitation, we’re going to pay up for James Harden and going to get some solid value with both Eric Gordon & P.J. Tucker.

For the Grizzlies, we’re going to go with two of their main offensive weapons in Ja Morant, who should have a big night as the Rockets have no one on the perimeter that will be able to guard him, and Jonas Valanciunas who is coming off a monster 61.3-point performance against the Golden State Warriors this past Sunday.

Phoenix has a great match-up against the Atlanta Hawks who rank 29th in points allowed and rank dead last in turnovers per game (16.6).

The Suns will be without Ricky Rubio tonight which opens up some great value for Elie Okobo and going to pay up for Kelly Oubre who is coming off one of his best games of the season agianst the Charlotte Hornets (25 points, 15 reb, 1 ast, 2 blk, 4 stl) and should see another 35-40 minutes of action tonight.

We’re going to get some nice value with Golden State’s Omari Spellman who is averaging 31.2 FanDuel points per game over his last five contests and gets a decent match-up agianst the Dallas Mavericks tonight.

Rounding out our team, with all the value we were able to get tonight, we have enough salary to spend up on the Mavericks Luka Doncic. Doncic has struggled for his standards as of late, however, he has 70+ FanDuel upside on any given night and has a great match-up against the Golden State Warriors tonight.