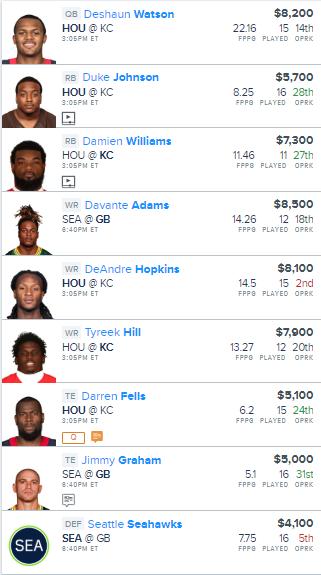 Let’s take a look at our NFL FanDuel lineup for the “Sunday Only” slate that starts on Saturday at 4:35pm!

DON’T FORGET TO CHECK OUT OUR NFL DRAFTKINGS “SUNDAY ONLY” LINEUP FOR THIS WEEKEND’S DIVISIONAL PLAYOFF GAMES!

We’re kicking off our Sunday team with a full 4-man stack of the Houston Texans in their match-up against the Kansas City Chiefs.

I’m expecting this game to become a shootout with the Texans fighting from behind which should mean big games for the main Texans playmakers.

Watson shook off a tough 1st half last week and dominated the rest of the game en route to a solid 29.38 point performance agianst the tough Buffalo defense. Watson ran the ball a season high 14 times and I expect him to do some major damage with his legs this afternoon.

The Chiefs have been solid agianst the pass this season, however, DeAndre Hopkins is arguably the best WR in the league and as he found success las week against the very good Tre’Davious White of the Bills, I think he tops 100 yards today with a TD.

Duke Johnson had a productive game agianst the Chiefs during the regular season (12.4 FanDuel points) and as I see the Texans needing his services in the passing game today, I like the value.

Houston will be without TE Jordan Akins today which means Fells will be on the field as much as he can and between the fact that the Chiefs haven’t been great agianst TE’s and that he is a red zone target, I like the value he brings to the table today.

Staying in this match-up, we’re going to pay up for both Damien Williams & Tyreek Hill of the Kansas Chiefs.

Williams has been the clear cut running back for the Chiefs over the past few weeks and hasn’t disappointed. The Texans have had major issues agianst the run this season and I expect Williams to have another big game.

Hill has some of the best speed in the league and will be against a Houston Texans secondary that has been below average agianst the pass. Hill certainly will have a few deep throws to him this afternoon and I see him hauling in at least two big plays with one of them being a TD.

For the Packers, we’re paying up for Davante Adams and going with some value with Jimmy Graham.

Adams will most likely see about 15 targets today and I imagine he won’t have any issues getting us 100 yards and hopefully a TD.

Graham hasn’t been great this season, however, he did see 7 targets last week and faces a Seattle team that has had no success defending TE’s this season.

For our defense, we’re rolling with the Seattle Seahawks. I don’t love having to roll with them, but I’m not in love with any of the defenses on this slate and paying down for the Seahawks allows us to get our trio of WR in Adams/Hopkins/Hill.