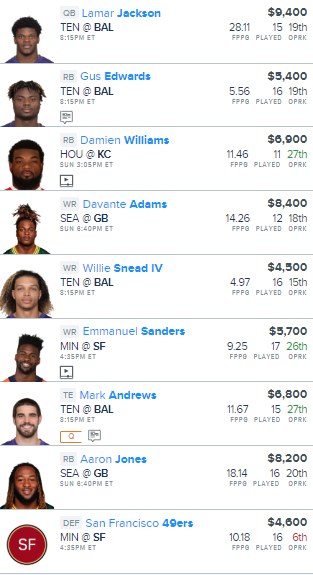 Let’s take a look at our NFL FanDuel lineup for the “Saturday-Sunday” slate that starts on Saturday at 4:35pm!

DON’T FORGET TO CHECK OUT OUR NFL DRAFTKINGS “SATURDAY-SUNDAY” LINEUP FOR THIS WEEKEND’S DIVISIONAL PLAYOFF GAMES!

We’re kicking off our lineup with a full 4-man stack of Baltimore Ravens in their home match-up against the Tennessee Titans.

Although I was tempted to roll with Jimmy Garoppolo for the 49ers, I just can’t fade Lamar Jackson with his ability to do so much damage with both his arm and legs.

Mark Ingram is currently questionable with a calf injury, however, even if he plays, I think Gus Edwards will get some action, especially if the Ravens run away with this one.

I needed some salary relief and I’ll roll the dice with Snead IV to hopefully see a few targets.

I’m paying up for Edwards who has been Jackson’s main target throughout the season and has had no trouble finding the endzone this year as he comes into this game with 10 TD receptions.

For the 49ers, we’re going to go with some great value in Emmanuel Sanders while paying up for the San Francisco Defense.

Sanders is one of the few players with some playoff experience and I think he’ll see a bit more usage than he has as of late from Garoppolo.

I like the 49ers defense today as they have the talent and speed to slow down Dalvin Cook and I think they’ll bring enough pressure on Cousins to cause some turnovers.

We’re going with Damien Williams for the Kansas City Chiefs as he has one of the best match-ups against the Houston Texans who have struggled agianst the run this season.

Rounding out our team, we’re going to pay up for two of the main Green Bay Packers weapons in Davante Adams & Aaron Jones.