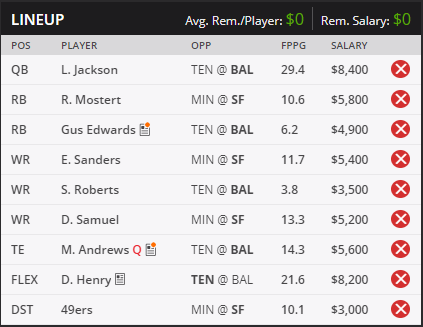 Let’s take a look at our NFL DraftKings lineup for the “Saturday Only” slate that starts on Saturday at 4:35pm!

DON’T FORGET TO CHECK OUT OUR NFL FANDUEL “SATURDAY ONLY” LINEUP FOR THIS WEEKEND’S DIVISIONAL PLAYOFF GAMES!

We’re kicking off our lineup with a full 4-man stack of Baltimore Ravens in their home match-up against the Tennessee Titans.

Although I was tempted to roll with Jimmy Garoppolo for the 49ers, I just can’t fade Lamar Jackson with his ability to do so much damage with both his arm and legs.

Mark Ingram is currently questionable with a calf injury, however, even if he plays, I think Gus Edwards will get some action, especially if the Ravens run away with this one.

I needed some salary relief and I’ll roll the dice with Roberts to hopefully see a few targets.

I’m paying up for Edwards who has been Jackson’s main target throughout the season and has had no trouble finding the endzone this year as he comes into this game with 10 TD receptions.

Raheem Mostert has been main RB for the 49ers for the last few months and although it’s a tough match-up, Mostert has had a knack of finding the end zone and I think that continues this afternoon.

I think Sanders and Samuel have two of the best values at WR on the slate.

The 49ers defense has the speed and athleticism to contain Cook and as I think they’ll get some decent pressure on Cousins, I think we see a few turnovers from the Vikings today.

Rounding out our team, we’re going to pay up for the Titans Derek Henry who although will probably see about 8 people in box at all times, is probably going to touch the ball about 25-30 times today and seems somewhat unstoppable at the moment.