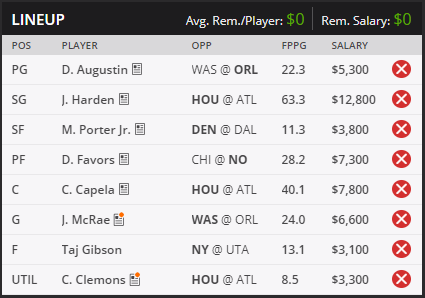 Going with a GPP Lineup tonight!

Kicking off our lineup tonight, we’re going with 3-man stack of Houston Rockets in their road match-up agianst the Atlanta Hawks!

Russell Westbrook will be sitting out tonight which means we’re going to be paying up for both James Harden & Clint Capela.

We’re also going to go with risky pick in Chris Clemons who was just recalled for tonight’s game. Clemons saw 33 minutes in the last game that Westbrook wasn’t available and has shown his ability to put up points (had 40 in his last G-League game on Sunday). Atlanta has one of the highest turnover rates in the league and as Clemons won’t be shy putting up shots if he gets into the game, I think he’ll crush value if he sees around 20 minutes tonight.

We’re going with D.J. Augustin of the Orlando Magic, who despite coming off the bench, has averaged 28.2 DraftKings points per game over his last six games, including a monster 46.75-point performance against the same Wizards team he’ll be facing off against tonight.

Staying in this match-up, we’re going to go with Jordan McRae who has had an amazing usage rate with Bradley Beal off the floor. McRae has seen around 30-35 minutes as of late and as he has topped 50.25 FanDuel points in two of his last five games, I think he is a great value at $6,600.

We’re going with Derrick Favors of the New Orleans Pelicans who has a great match-up agianst the Chicago Bulls. The Bulls have struggled against opposing PF’s all season and with Jrue Holiday out, Favors should see increased usage on the offensive end.

We’re going with some value with Denver’s Michael Porter who should see an increased amount of playing time with Will Barton already listed as out.

We needed additional value and going to take a chance with the Knicks Taj Gibson. Julius Randle is out tonight and with Marcus Morris also doubtful, I think Gibson sees 20-25 minutes tonight and should be able to crush value at this price.