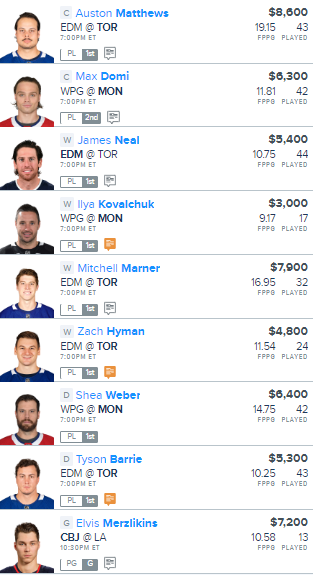 For our NHL lineups tonight, we’re going to be focusing heavily on the Toronto Maple Leafs & Montreal Canadiens.

Toronto has been on fire as of late, going 9-0-1 over their last 10 games and have really been incredible on the offensive end, averaging 4.9 goals/game in that span.

Toronto has been outstanding at home this season, posting a 11-4-5 record and gets a decent match-up agianst an Edmonton Oilers team that ranks 18th in the NHL in goals allowed/game (3.11).

Staying in this match-up, we’re going to go with Edmonton’s James Neal who has great value at just $5,400 as he comes into this game with 19 goals/8 assists on the season and is part the Oilers top power-play unit.

Montreal has some solid value on tonight’s slate in their home match-up agianst the Winnipeg Jets.

Montreal has struggled as of late, however, they are decent offensive team that ranks 1st in the NHL in shots/game (35.4) and faces a Winnipeg team that has lost 5 of their last 6 games while allowing 4.7 goals/game in that span.

For the Canadiens, we have a 3-man stack of Max Domi, Ilya Kovalchuk, & Shea Weber.

Rounding out our team, we’re going to go with the Elvis Merzlikins in net for the Columbus Blue Jackets in his good match-up agianst a Los Angeles Kings team that ranks just 28th in goals/game.