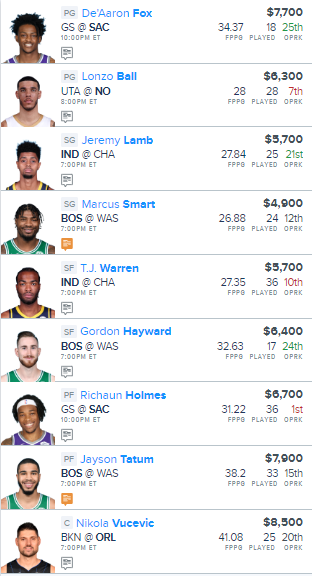 For our NBA lineup tonight, we’re going to start off with a 3-man stack of the Boston Celtics in their outstanding match-up agianst the Washington Wizards.

The Celtics will once again be without Kemba Walker who has already been ruled out due to an illness and has the best match-up on the slate against the Washington Wizards.

Boston currently has an implied scoring total off 117.75 and we’re going to count on Marcus Smart, Gordon Hayward, and Jayson Tatum.

We have a 2-man stack of Indiana Pacers as they have a decent match-up against the Charlotte Hornets and will be without Malcolm Brogdon who is out with a back injury.

For the Pacers, we’re going with Jeremy Lamb who put up 30.7 FanDuel points in just 24 minutes of action against his former team earlier this season and T.J. Warren who has been averaging 33.5 FanDuel points per game over his last six games.

We have a 2-man stack of Sacramento Kings in De’Aaron Fox & Richaun Holmes in their great match-up against the Golden State Warriors.

New Orleans will be without Jrue Holiday due to an elbow injury tonight which should mean more usage for Lonzo Ball who I think is a bit underpriced at $6,300 after topping 53.2 FanDuel points in two of his last three games.

Rounding out our team, we’re going to pay up for Nikola Vucevic of the Orlando Magic in his match-up agianst the Brooklyn Nets.