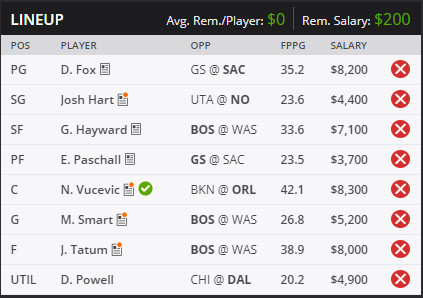 For our NBA lineup tonight, we’re going to start off with a 3-man stack of the Boston Celtics in their outstanding match-up agianst the Washington Wizards.

The Celtics will once again be without Kemba Walker who has already been ruled out due to an illness and has the best match-up on the slate against the Washington Wizards.

Boston currently has an implied scoring total off 117.75 and we’re going to count on Marcus Smart, Gordon Hayward, and Jayson Tatum.

We’re paying up for the Kings De’Aaron Fox in his outstanding match-up agianst the Golden State Warriors. Golden State doesn’t have anyone on their current roster that will be able to keep up with the speed of Fox and as I think he’ll be able to rack up some solid defensive stats tonight, I think he has 50+ DraftKings point upside.

Staying in this match-up, we’re going to go with some value in the Warriors Eric Paschall who should have a sizable workload tonight with the Warriors being without both D’Angelo Russell & Draymond Green.

New Orleans will be without Jrue Holiday due to an elbow injury tonight which should mean more usage for Josh Hart who will most likely getting the start tonight.

We’re going to pay up for Nikola Vucevic of the Orlando Magic in his match-up agianst the Brooklyn Nets.

Rounding out our team, we’re gong with Dwight Powell of the Dallas Mavericks. Powell has seen his role increase with the Mavericks being without Kristaps Porzingis out, seeing 38 minutes against the Hornets on Saturday. Chicago has been terrible agianst opposing centers this season and if Powell is going to see 30-35 minutes, I think he’ll crush value tonight at his $4,900 price tag.