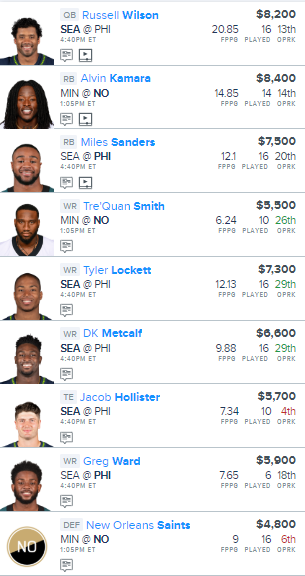 Let’s take a look at our NFL FanDuel lineup for the “Sunday Only” slate that starts at 1:00pm!

DON’T FORGET TO CHECK OUT OUR NFL DRAFTKINGS “SUNDAY ONLY” LINEUP FOR THIS WEEKEND!

We’re going to kick off our lineup with a full 4-man stack of the Seattle Seahawks in their match-up agianst the Philadelphia Eagles.

The combination of the Seahawks questionable running game and the fact that the Eagles secondary has been terrible throughout the season opens up a huge opportunity for Seattle’s passing attack.

Staying in this match-up, we’re going to be going with the Eagles Myles Sanders & Greg Ward.

Jordan Howard is back and is going to have a role in the offense, however, it’s going to be hard for the Eagles to get away from Miles Sanders with how well he has been rolling over for the past month. Sanders is threat in the passing game along with the running game and I think he still plays a major role agianst a Seattle defense that hasn’t been great this season.

Nelson Agholor has already been listed as out which leads to Greg Ward being the top WR on the depth chart. Ward has been averaging more than 7 targets in each of the last 4 weeks and should see plenty of usage today.