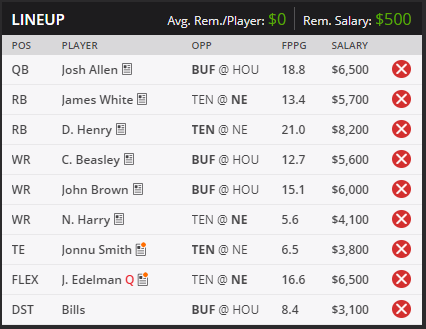 Let’s take a look at our NFL DraftKings lineup for the “Saturday Only” slate that starts on Saturday at 4:35pm!

DON’T FORGET TO CHECK OUT OUR NFL FANDUEL “SATURDAY ONLY” LINEUP FOR THIS WEEKEND!

We’re kicking off our lineup with a 4-man stack of the Buffalo Bills in their match-up against the Houston Texans.

Houston’s defense has struggled agianst both the run & pass this season and I think this is great opportunity for the Bills offense to put up some decent points.

I’m a Patriots fan (born and raised in NH so don’t blame me…haha) and if there is one thing I’ve learned about the Patriots over the years, they’re going to do the complete opposite than what you expect on the offensive end.

With the struggles of the Patriots passing attack, a strong Tennessee secondary, and some questionable weather at Foxboro tonight, you would expect a rushing attack by the Patriots so I’m going to create some separation from the other lineups and load up with a 3-man stack of Patriot passing options.

For New England, we’re going to go to pay up for James White & Julian Edelman while taking a chance with N’Keal Harry who looks like he’ll be the 3rd option for Tom Brady tonight!

Staying in this match-up, I’m going to pay up for Derrick Henry and Jonnu Smith.

The Patriots defense I think has huge upside, however, as this is just a 2-game slate, I think it’s hard to get away from Derrick Henry who is going to see a huge workload today.

At TE, we don’t really have many safe options so I’m going to spend up on Smith who has the highest likelihood for a productive game.