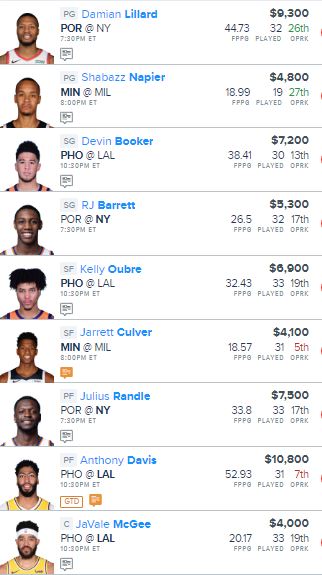 For our lineup tonight we’re going to lead off with some value plays for the Minnesota Timberwolves who will be without Jeff Teague, Andrew Wiggins, & Karl-Anthony Towns.

Minnesota comes into this game as 17.5-point underdogs so we should see plenty of minutes for a variety of their bench players tonight.

As of now, I’m going with a 2-man stack of Timberwolves in Shabazz Napier & Jarrett Culver,

For the POR/NY match-up we’re going to be paying up for the Trailblazers Damien Lillard and the Knicks Julius Randle.

Lillard has been outstanding as of late, averaging over 50 FanDuel points in each of his last three games and I think his hot shooting continues tonight a decent match-up against the New York Knicks.

Randle has been incredible as of late, which included a monster 56.2 FanDuel point performance agianst the Wizards on Saturday. Portland has really struggled agianst PF’s on the season and I think that continues tonight.

Although I’m a bit concerned of a Lakers blowout tonight in their match-up agianst the Phoenix Suns, we’re still getting heavy exposure in this game.

For the Phoenix Suns, we’re paying up for both Devin Booker & Kelly Oubre.

Booker and Oubre have carried the Suns in their last two games as combined, they put up back-to-back performances of 103.1 & 98.7 FanDuel points.

For the Lakers, we’re going to pay up for Anthony Davis while getting some value with JaVale McGee.

Let’s end this decade with a big win!