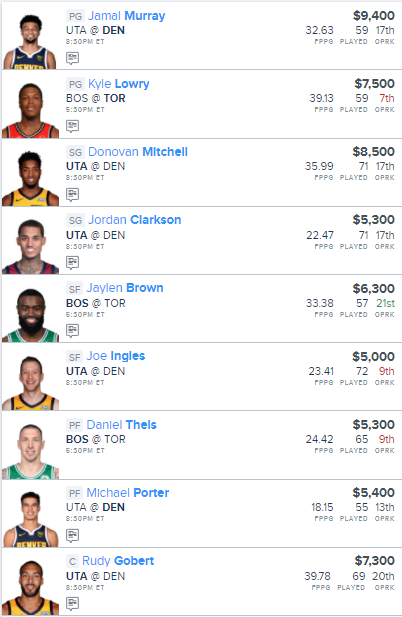 We have some great NBA action today as the Toronto Raptors try to bounce back after a blowout loss to the Boston Celtics in their first game of their series, while we have an exciting Game 7 with the Denver Nuggets & Utah Jazz!

Let’s take a look at our NBA FanDuel slate which starts at 5:30!

DON’T FORGET TO CHECK OUT OUR NBA DRAFTKINGS LINEUP FOR TONIGHT!!!

Having more salary to play around with on FanDuel, I started my build making sure I had both Jamal Murray & Donovan Mitchell in the lineup as I imagine that both will see 25+ shots and once again be the focal points of their respective offenses.

My next decision was what I wanted to do at the center position and whether I wanted to roll the dice with Robert Williams of the Celtics who was productive in 18 minutes off the bench in Game 1. I think that although Williams will still see time, if Theis stays out of foul trouble, he probably will see more like 10-12 minutes and I just do not see him being as productive despite his ability to pile up blocks. As I think he is going to be extremely popular tonight, I am going to fade him and actually spend up on Rudy Gobert who has been steady in the series and we should pick up at least another double-double.

I like the value that both Jordan Clarkson and Joe Ingles bring as we know Utah is basically going to have a 7-man rotation tonight as just as both with see minutes and we know Clarkson will at least put up 13-15 shots, I don’t mind stacking Utah agianst a Denver defense that has been very questionable throughout their time in the bubble.

For Denver, pairing with Jamal Murray, I’m going with Michael Porter Jr. Porter Jr. has shown his incredible upside and as he just brings more of a scoring threat that Paul Millsap, I think he sees around 30 minutes tonight and hits value.

For the Raptors, I like the value that Kyle Lowry brings to the table at just a $7,500 price tag.

For the Celtics, we’re also going with some nice value in both Jaylen Brown & Daniel Theis!

Here is our NBA FanDuel lineup for tonight!