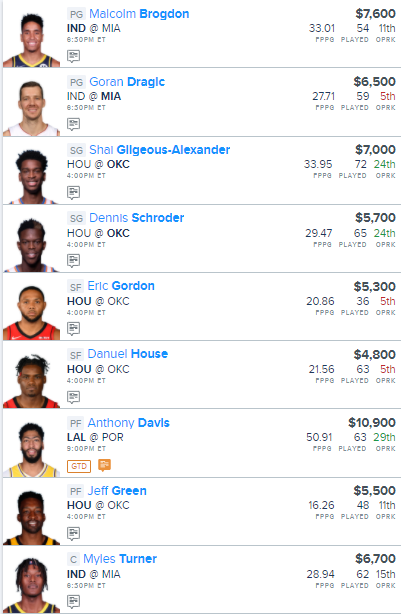 We had a great weekend with our DFS Golf lineups, and we are going to look to keep that momentum going today as we kick off our week with our NBA FanDuel Lineup that features 4 games and starts at 1:30pm!

For our FanDuel lineup, we are going to have heavy exposure to the HOU/OKC game.

I love the value that the Houston role players bring in this matchup and we are going to going to role with the trio of Eric Gordon, Danuel House, & Jeff Green.

Gordon, House, & Green all played 38+ minutes and put up at least 10 shots each and just as the opportunity to produce will be there once again tonight, I love the value that they all bring at their midrange prices.

Staying in this match-up, I am going with both Shai Gilgeous-Alexander & Dennis Schroder.

Gilgeous-Alexander has put up back-to-back performances of 43.2 & 54.4 FanDuel points in his last two games and as I expect another strong performance from tonight, I think he crushes value at just $7,000.

Schroder got off to a slow start in this series, but he looked outstanding in Game 3 and was part of the small-ball lineup that help the Thunder pull away for the victory in OT. Schroder played 39 minutes while putting up 23 shots in Game 3 and I think he is almost a must play at just $5,700 if he is going to see that type of usage.

We have a 2-man stack of the Indiana Pacers with Malcolm Brogdon & Myles Turner in their match-up agianst the Miami Heat.

Brogdon had one of his best performances in his career in Game 3 (34 pts, 7 reb, 14 ast, 2 stl) and I think he has another big game and gets us a 50+ FanDuel point performance today.

Turner is often overlooked at the center position, but he has been strong, averaging almost 40 FanDuel points over his last two games and I think he has another strong performance today.

Rounding out the team, we are going to pay up for both Goran Dragic of the Miami Heat & Anthony Davis of the Los Angeles Lakers.