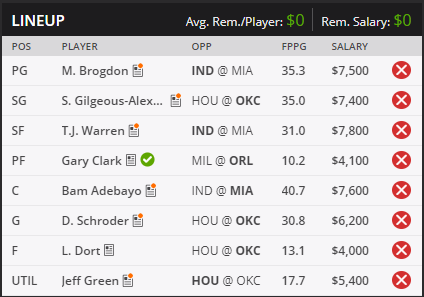 We had a great weekend with our DFS Golf lineups, and we are going to look to keep that momentum going today as we kick off our week with our NBA DraftKings Lineup that features 4 games and starts at 1:30pm!

DON’T FORGET TO CHECK OUT OUR NBA FANDUEL LINEUP FOR TODAY!!!

For our DraftKings lineup, we are going to have heavy exposure to the HOU/OKC game.

I am going to go with a 3-man stack of the Oklahoma City Thunder with Shai Gilgeous-Alexander, Dennis Schroder, and Luguentz Dort.

Gilgeous-Alexander has put up back-to-back performances of 43.2 & 54.4 FanDuel points in his last two games and as I expect another strong performance from tonight, I think he crushes value at just $7,400.

Schroder got off to a slow start in this series, but he looked outstanding in Game 3 and was part of the small-ball lineup that help the Thunder pull away for the victory in OT. Schroder played 39 minutes while putting up 23 shots in Game 3 and I think he is almost a must play at just $6,200 if he is going to see that type of usage.

Luguentz Dort saw an incredible 36 minutes in Game 3 and as I expect him to see another 30 minutes tonight, he has too much value at just $4,000 to pass up on.

Staying in this matchup, we are going to be going with Jeff Green of the Houston Rockets.

Similar to Dennis Schroder, Jeff Green is seeing major minutes of the bench and has really taken over for Robert Covington who has struggled in this series. Green saw 38 minutes of action in Game 3 while putting up 13 shots as I expect him to continue to produce, I like his value at $5,400.

We are going to paying up for the duo of Malcolm Brogdon & T.J. Warren of the Indiana Pacers.

Brogdon had one of his best performances in his career in Game 3 (34 pts, 7 reb, 14 ast, 2 stl) and I think he has another big game and gets us a 50+ DraftKings point performance today.

Warren has been arguably the best player in the bubble, and I expect him to have a big game tonight as the Pacers try to avoid elimination.

Staying in this matchup, we are going with Miami’s Bam Adebayo as he just has too much value at $7,600 to pass up on.

Rounding out the team, we are going with Gary Clark of the Magic who has posted 25+ DraftKings performance in two of the three games in this series and I think he continues to see 30-35 minutes with Aaron Gordon out.