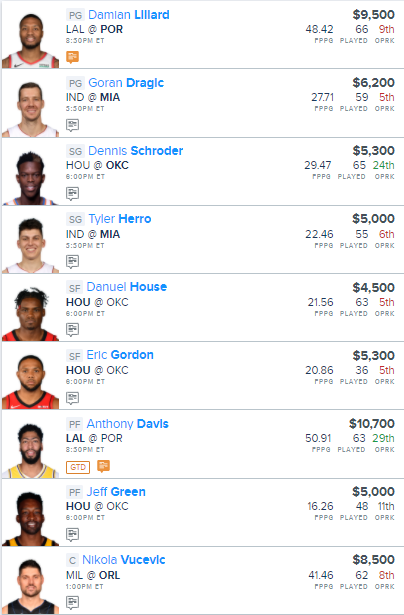 It’s the weekend and we got some great sports action to cover!

Let’s kick it off with our NBA FanDuel lineup which features 4 games and starts at 1:00pm.

The question when it has come to these games is to whether to pay up for James Harden our not, and although that is usually a no-brainer when Russell Westbrook has been out, Harden has actually been slowed down a bit by his former team the Oklahoma City Thunder.

I’m going to go against Harden today and load up with the Rockets roles players in Daniel House Jr., Eric Gordon, & Jeff Green.

I like going with this trio today as between the three of them, they averaged 36 minutes and about 15 shots each in Game 2.

We are going to continue to get some value with the Miami Heat with both Goran Dragic & Tyler Herro.

Dragic has been solid this series and actually led the heat with 18 shots last game while Herro has been seeing mid-30’s minutes and although his production can vary, he certainly has 40 FanDuel point upside on any given night.

Damian Lillard is not going to be 100% coming into this game, however, as the injury is not on his shooting hand I’m not overly concern that we’re not going to see the same volume of shots that we normally would see from Lillard. I like this play as I think people will shy away from his $9,500 price tag keeping his ownership lower than normal.

We are going to get some value with Oklahoma City’s Dennis Schroder. Schroder has struggled a bit in this series, but he is seeing 30+ minutes and we all know he has no trouble putting up shots coming off the bench for the Thunder.

Rounding out the team, we’re going to pay up for both Anthony Davis of the Los Angeles Lakers & Nikola Vucevic of the Orlando Magic.