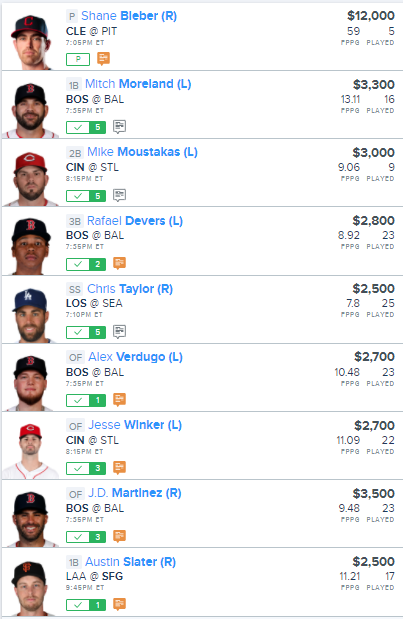 Let us take a look at our MLB FanDuel lineup for tonight which features 8 games and starts at 7:05pm!

DON’T FORGET TO CHECK OUT OUR MLB DRAFTKINGS LINEUP FOR TODAY!!!

On the mound tonight, we are going to be paying up for Cleveland’s Shane Bieber in his matchup agianst on the road agianst the Pittsburgh Pirates. Bieber has been lights out so far this season as after five starts, the right-hander has posted an incredible 1.30 ERA, 0.721 WHIP and a 14.0 K/9 ratio. Bieber is holding opponents to just a .160 batting average and gets a nice match-up agianst a Pittsburgh team that ranks 18th in team strikeout rate and as averaged over 11 strikes as a team in their last three games.

On the offensive end, we are going to go with a 4-man stack of the Boston Red Sox in their great matchup against the RHP Asher Wojciechowski of the Baltimore Orioles. Wojciechowski comes into this game with a 2.4 HR/9 ratio and I think the Red Sox’s have a big night offensively against him tonight.

For the Red Sox, we are going to roster Mitch Moreland, Rafael Devers, Alex Verdugo, and J.D. Martinez.

We have a 2-man Cincinnati Reds stack with Mike Moustakas & Jesse Winkler in their matchup agianst the RHP Adam Wainwright. Wainwright has had a nice start to his 2020 season, however, this is the same pitcher that allowed LHB’s to post a .288 average/.884 OPS agianst him last season and I think the Reds LHB’s have a nice night.

Rounding out our team, we are going with some solid value in Chris Taylor of the Los Angeles Dodgers & Austin Slater of the San Francisco Giants.