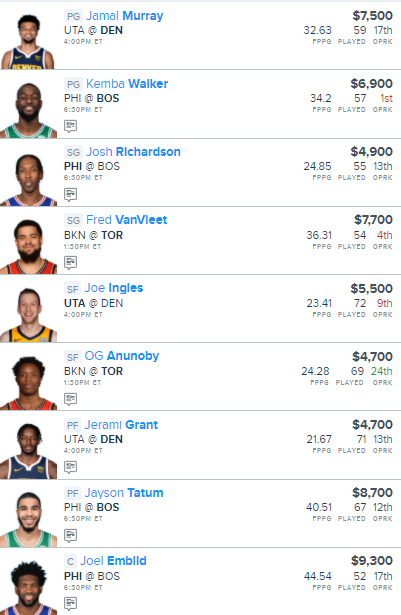 The NBA playoffs continue this afternoon and let us look at today’s NBA FanDuel Lineup that features a 4-game slate and starts at 1:30pm.

At our PG position today, we are going right back with the duo we went on Monday with Jamal Murray of the Denver Nuggets & Kemba Walker of the Boston Celtics.

Jamal Murray is one of the better young shooters in the league and that was on full display on Monday, after Murray carried the Nuggets at times and finished with an impressive 13-20 FG performance. Murray is a huge part of the Denver offense and as I expect him to get up another 20-25 shots, I think he has another big game tonight.

It was great to see Kemba Walker get 35 minutes of action on Monday after dealing with a bad knee for awhile now and it’s hard not to roster him at his current price especially as he should have a higher usage rate with Gordon Hayward not available.

We have a ton of value at the SG position, but my favorite today is the 76ers Josh Richardson. Richardson put up 17 shots in game 1 and with such a focus on double Embiid, I think Richardson gets another 15-20 shots tonight and as he can pick up some defensive stats, I think he has 40+ upside tonight.

Fred VanVleet has been outstanding all season, but he has picked it up another level in the bubble and it showed with his double-double (30 pts, 11 ast, 2 reb, 2 stl, 1 blk). VanVleet will still be looked over a bit tonight and I am going to continue to roll with him at a solid price point of $7,700.

We’re going to get value at the SF position and go with Joe Ingles of the Utah Jazz & OG Anunoby of the Toronto Raptors. Both Ingles & Anunoby will see around 35 minutes and I like their upside today!

At the PF position, we’re going with Jerami Grant of the Denver Nuggets & Jayson Tatum of the Boston Celtics.

Jerami Grant saw 39 minutes on Monday and put up a respectable 29.5 FanDuel point performance. Grant did not pull down a single rebound in this game which is crazy to think about and as he can contribute with steals & blocks, I like his upside today.

Jayson Tatum is going to be a popular play today and for good reason as the Celtics will be playing him as much minutes as possible and he could see even higher usage with Gordon Hayward out. Tatum is a star and I think he puts the Celtics on his back tonight!

Rounding out the team, we’re paying up with Joel Embiid as although he still put up a 50.7 FanDuel point performance on Monday, it almost seemed disappointing as it was clear that Boston doesn’t have anyone that can stop him. I think Embiid is more aggressive tonight as Philadelphia will need to dominate, which he certainly can, to have a chance to win this game.