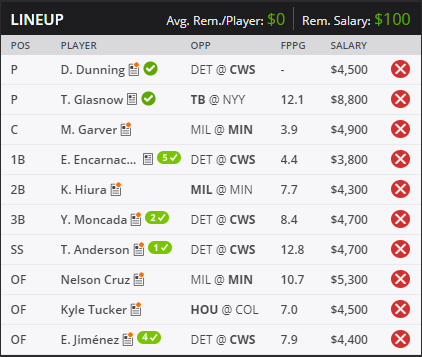 Let us take a look at our MLB DraftKings lineup which features 11 games and starts at 7:05 PM tonight.

In terms of weather, the only game that is going to be in question is the WAS/ATL game. As of right now, it’s starting to look more and more that there will be a delay at some point and I’m going to stay away from this match-up tonight despite it being a solid one to attack on the offensive end.

It’s been a crazy day at my 9-5, but I’m going to keep this one pretty short.

On the mound tonight, we’re going to pay up for Tyler Glasnow of the Tampa Bay Rays and go with some value with Dane Dunning who will be making his MLB debut for the Chicago White Sox.

Tyler Glasnow has struggled a bit this season but certainly has some of the best K-upside on the slate and faces a Yankees lineup that is missing two of their best hitters in Aaron Judge & Giancarlo Stanton.

Dane Dunning will be making his MLB debut this season and is one of the better pitching prospects who has had a bunch of success in the minors. Dunning has not pitched a regular season matchup for a while due to a tommy john surgery, however, he has too much upside to pass up on at $4,500 against a Detroit Tigers team that ranks 26th in team strikeout rate (9.95 K/game).

I’m going with a 4-man stack of Chicago White Sox’s against the RHP Casey Mize who will be making his MLB Debut tonight.  Mize was the overall top pick by the Tigers a few years back, but he doesn’t pile up a bunch of K’s and I think the power of the White Sox bats are going to get to him tonight.

We’re targeting both Keston Hiura of the Milwaukee Brewers & Nelson Cruz of the Minnesota Twins who are both excellent against LHP’s are in great spots tonight.

Rounding out our team, we have Mitch Garver who is long overdue for a big game for the Twins and we’re getting some decent value with Kyle Tucker of the Houston Astros in his matchup at Coors Field.