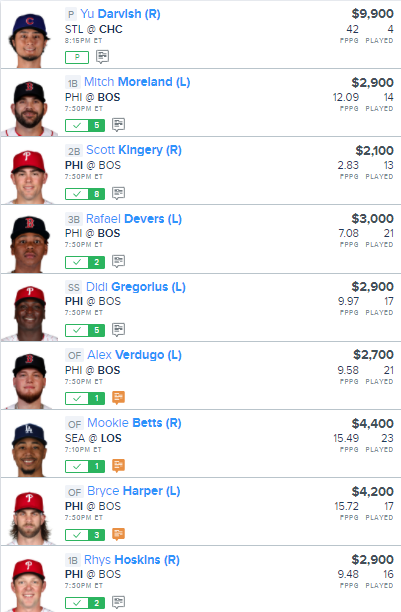 Let’s take a look at our FanDuel MLB “Main Slate” Lineup that features 11 games and starts at 7:05pm!

We really don’t have any weather concerns tonight so feel free to attack any of the 11 games on the slate.

DON’T FORGET TO CHECK OUT OUR MLB DRAFTKINGS “MAIN SLATE” LINEUP FOR TONIGHT!!!

On the mound, we are going to pay up for Yu Darvish of the Chicago Cubs in his matchup agianst the St. Louis Cardinals. Darvish has picked up where he left off last season and through his four appearances this season, has posted a 1.88 ERA & 0.75 WHIP while posting a solid 10.1 K/9 ratio. Darvish has had success agianst the current St. Louis roster, holding the Cardinals to just a .192 average and I think he continues his strong start to the 2020 season tonight.

On the offensive end, I’m all in for a game stack with the Philadelphia Phillies taking on the Boston Red Sox at Fenway Park.

I’m not sold on either Zach Eflin or Zack Godley and expect both to struggle with the wind blowing out at Fenway tonight.

For the Phillies, we’re going with a 4-man stack of Scott Kingery, Didi Gregorius, Bryce Harper, and Rhys Hoskins.

For the Red Sox, we’re going with a 3-man stack of Mitch Moreland, Rafael Devers, and Alex Verdugo.

Rounding on the team, we’re going to pay up for the incredible Mookie Betts of the Los Angeles Dodgers. Mookie has been on fire as of late, posting a .400 average/1.355 OP with 5 HR’s over the past week and I like his matchup agianst the LHP Marco Gonzales of the Seattle Mariners tonight.