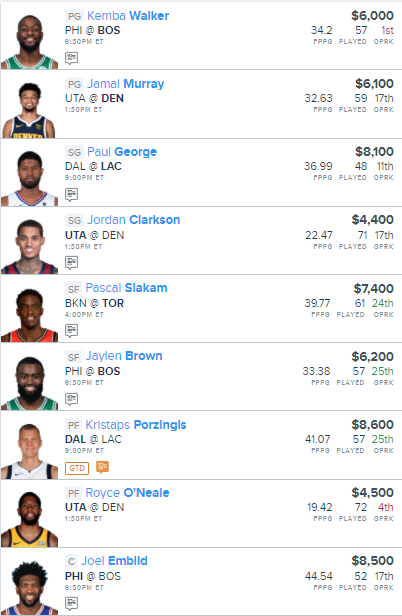 Kicking off our lineups this week, we have some playoff NBA action as we look at today’s NBA “Main Slate” that features four games and starts at 1:30pm.

Now that we’re in the NBA playoffs, it’s going to be much easier putting together our NBA lineups as we know the regulars will be playing all the minutes that they can handle and we don’t have to worry as much about last-minute changes to the lineups.

DON’T FORGET TO TAKE A LOOK AT OUR NBA DRAFTKINGS “MAIN SLATE” FOR TODAY!!!

Kicking off our lineup, we are going to get some nice value on the first game on the slate with Utah’s Jordan Clarkson & Royce O’Neale.

Utah comes in with one of the smallest rotations which sees their regulars play around 35 minutes there will be more minutes for a few others with Mike Conley not available today.

Jordan Clarkson becomes the best value on the slate as even if he does not replace Conley in the starting lineup, he should see plenty of minutes and still get up 10-15 shots today.

O’Neale is a valuable role players for the Jazz and although he is not a focal point on the Nuggets offense, he has ability to fill up the stat sheet and I think as he will see plenty of time tonight, he could get us 25-30 FanDuel points.

For the Nuggets, I’m going to get some nice value in Jamal Murray who should be fully back up to speed after missing his first 4 games in the bubble. Murray is a true scorer and I think he just brings to much value with his $6,100 price tag.

I’m going to get some action with the Boston Celtics in both Kemba Walker & Jaylen Brown.

The Celtics have been careful with Kemba Walker’s knee, but he has been slowing ramping off the minutes and I think we see him play about 30 today in a great match-up.

As I think the 76ers will put their best defender in Matisse Thybulle on Tatum, I think this opens the door for Jaylen Brown to have a big game tonight. Brown put up 32 points & 9 rebounds in his last game against Philadelphia and I think he goes off big again tonight.

Staying in this match-up, we are going to pay up for Joel Embiid as if the 76ers are going to have any shot to win this game, Embiid will need to dominate.

Rounding out the team, we are going to be paying up for some of the studs in the other matchups in Paul George, Pascal Siakam, and Kristaps Porzingis.