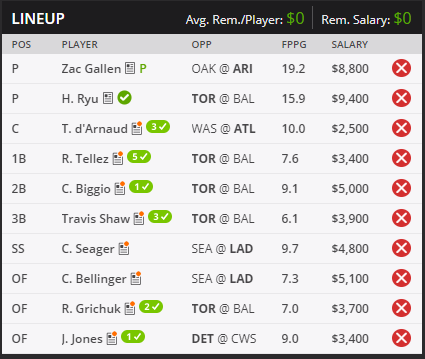 Let us look at tonight’s DraftKings MLB “Main Slate” that features 11 games and starts at 7:05pm!

As for the weather, we do need to keep an eye out for the games in the northeast as both the BOS/NYY & TOR/BAL. Both games have probably a pretty low postponement chance, but we will want to keep an eye on it prior to first pitch.

On the mound tonight, we are going to pay up for both Toronto’s Hyun Jin Ryu & Arizona’s Zac Gallen.

Hyun Jin Ryu has been solid in his first year with the Toronto Blue Jays as he comes into his match-up agianst the Baltimore Orioles with a 4.05 ERA, 1.25 WHIP, & 10.8K/9 ratio. Baltimore doesn’t really have any experience agianst Ryu and as his changeup has been generate a bunch of swing and misses, I think Ryu comes through with a 25+ DraftKings point performance tonight.

Zac Gallen has been solid this season, posting a 2.74 ERA & 1.17 WHIP and we like him tonight just as he has K-upside with his 11.0 K/9 ratio. Oakland as some solid power, however, this is a team that strikes out a bunch as they rank 27th in team strikeout rate (10.05 K’s per game) and I think Gallen can get us 7 innings tonight while racking up 10 K’s.

On the offensive end, we are going to pay up for Los Angeles Dodgers in their matchup against the RHP Justin Dunn of the Seattle Mariners. Dunn has had trouble with control this season, posting a 1.62 WHIP and he has been known to give HR’s as he currently 2.1 HR/9 ratio.

For the Dodgers, we have a 2-man stack of Corey Seager & Cody Bellinger.

We have a 4-man stack of Toronto Blue Jays with Rowdy Tellez, Cavan Biggio, Travis Shaw, and Randal Grichuk.

Rounding out the team, we are going to get some value with the Braves Travis d’Arnaud & Tigers JaCoby Jones.

Do not forget to follow me on Twitter (@BrettCU05) as this is the best place for me to post any last-minute changes/adjustments to our DFS teams!