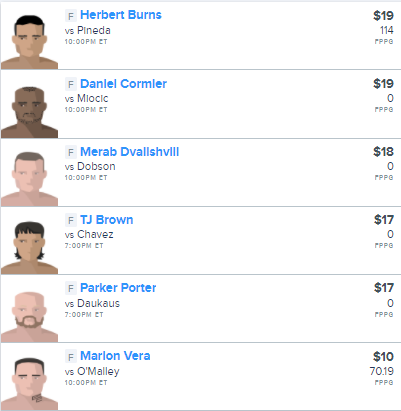 Hope everyone is enjoy their Saturday’s!

We have some great UFC action tonight as we have UFC 252 that starts at 7:00pm and takes place in Las Vegas, Nevada at the UFC APEX!

Let’s take a look at our FanDuel lineup tonight!

DON’T FORGET TO CHECK OUT OUR MMA DFS DRAFTINGS LINEUP FOR UFC 252!

When constructing our lineup tonight, it started off on whether I wanted to pay up for the exciting “Sugar” Sean O’Malley who has the highest salary on the slate.

After tolling back and forth, I decided that between what should be a high ownership rate, that I loved a bunch of the fighters in the $17-19 range, and that I think O’Malley is going to be more challenged against an experienced Marlon Vera who has never been finished, I’ve decided to fade O’Malley and actually take a value shot with Marlon Vera.

Do not get me wrong, I like O’Malley and he certainly has the power to knock Vera out with one punch, however, I think this fight could get interesting if Vera makes it out of the 1st round. Vera should be an active fighter that tries to take away the reach advantage O’Malley has and considering we really have seen O’Malley go past the 1st round, I wouldn’t be shocked to see him fade a bit as the fight goes on. Vera seems to have a bunch of confidence going into this fight and love the value at just $10.

With money we are saving by going with Marlon Vera, we’re able to roster five fighters between the 17-19 range who I think all have great opportunities to score knockouts and pile up the points.

My favorite of the bunch is Herbert Burns, who we’re putting in our MVP slot. Burns comes in as a huge favorite not just to win, but to finish his fight against Daniel Pineda. Burns is a great grappler and I think he will have no problem taking Pineda out early in this one and be the highest scoring fighter on the slate.

We are going to want some action in the “Main Event” and we’re going to do that with Daniel Cormier. Cormier is the superior wrestler and overall better fighter and I think he piles on the points and takes care of business in the later rounds against Stipe Miocic.

Rounding out our team, we’re going to be going with favorites in Merab Dvalishvili, TJ Brown, and Parker Porter who I think all can end their fights by KO/SUB!