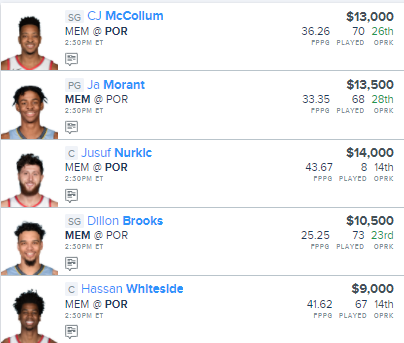 The NBA Playoffs have arrived as we kick-off the NBA Playoffs with the Western Conference Play-In Game that features the Memphis Grizzlies taking on the Portland Trailblazers which starts at 2:30pm!

DON’T FORGET TO CHECK OUT OUR DRAFTKINGS NBA SHOWDOWN FOR THE MEM/POR GAME!!!!

As this is a single-game showdown, I am going with more of a GPP lineup instead of our normal cash lineups!

As it’s a GPP lineup, I’m going to go against what will be the most obvious play and I’m fading Damian Lillard!

CJ McCollum had a 33-point (49.6 FanDuel point performance) agianst Memphis in one of the earlier games in the bubble and with Dillon Brooks on him, I expect another monster game from the sharpshooter and putting him in my MVP slot.

Jusuf Nurkic is going to be going in our PRO spot and I don’t mind pairing him with his backup Hassan Whiteside who has been very productive in about 20 minutes of action over his last two games.

For the Grizzles, we’re going to put their best player in Ja Morant in our STAR spot and hope for a great shooting night by Dillon Brooks who we know has no problem getting 15-20 shots up.

Here is our FanDuel Lineup: