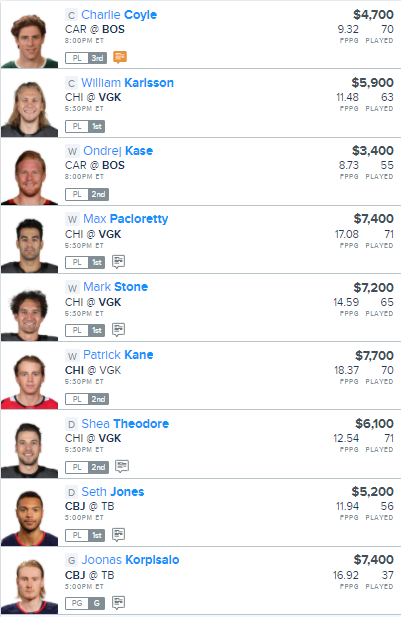 Let us look at our FanDuel lineup which features a 4-game slate and starts at 3:00pm!

For our lineup today, we’re going to kick up by paying up for a 4-man stack of the Las Vegas Knights in their outstanding match-up agianst the Chicago Blackhawks.

The Blackhawks, despite winning their first series agianst the Edmonton Oilers, still allowed the Oilers to average 3.75 goals/game and that trend continues in their 4-1 lost to the Knights on Tuesday.

Las Vegas has some great value on their 2nd & 3rd lines, however, I’m going to be paying up for their top line in William Karlsson, Max Pacioretty, Mark Stone along with their best defenseman in Shea Theodore.

Staying in this match-up, I’m paying up for Patrick Kane as I think he becomes a bit more aggressive today on the offensive end despite his recent struggles. Kane is still one of the best in the game as he comes into this game with 33 goals & 51 assists and as he can go off for 7+ shots at any moment, I’ll take my chances for a big game from him tonight.

For some value, I’m going with the Bruins 3rd line who looked solid in their 4-3 victory yesterday agianst Carolina. Boston’s powerplay looked extremely rusty which is why I’m fading their top line and I’m going with some value plays in Charlie Coyle & Ondrej Kase.

Rounding out our team, we are looking at the Columbus Blue Jackets and going to go with both Seth Jones and Joonas Korplsalo.

Seth Jones might have logged 65 minutes in that 5-OT thriller, but to be honest, he looked like he could have played another 60. Jones is going to get all the ice time he possibly can get as he vital to the Blue Jackets defense and generally he’ll hit value with shots & blocked shots alone.

It feels a bit like we’re chasing with Korpisalo after his incredible performance, however, he for the most part looked extremely sharp and I just think there is too much value at his price of $7,400 to pass up on. Korpisalo should see a bunch of shots again but I think he is up to the challenge and will once again have a big game.