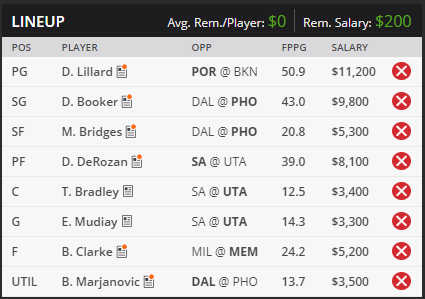 We have some more great NBA action today and let’s take a look at our DraftKings lineup which features a 5-game slate that starts at 4:00pm!

DON’T FORGET TO CHECK OUT OUR NBA FANDUEL LINEUP FOR TODAY.

As with all the NBA slates this week, it is important to monitor the injury reports throughout the night as we have a ton of players that might not play or have their minutes limited!

For today’s games, we do have four teams playing significant games as they are all fighting to be part of the Western Conference play in game!

We can be confident that the Memphis Grizzlies, Phoenix Suns, San Antonio Spurs, and Portland Trailblazers all will be having their regular lineups playing heavy minutes and we will be having a good percentage of our lineup filled up by these teams.

Unlike our FanDuel lineup, we can’t roster the best player from each of these teams, however, we were able to roster Damian Lillard, Devin Booker, and Demar DeRozan.

We’re getting some nice mid-range value with Mikal Bridges & Brandon Clarke who both should have major roles this afternoon.

We’re getting some nice value with both Tony Bradley and Emmanuel Mudiay for the Jazz. Both Mike Conley & Rudy Gobert have already been listed out and I do not expect the regular Jazz starters who are playing to play much today. Bradley had a monster game against the Spurs last week when he saw 22 minutes of action and Mudiay has been solid posting at least 24 DraftKings points over his last two games.

Rounding out the team, we’re going with Boban Marjanovic who should see some solid minutes tonight now that Kristaps Porzingis is considered doubtful for tonight’s game.

Here is our NBA DraftKings lineup: