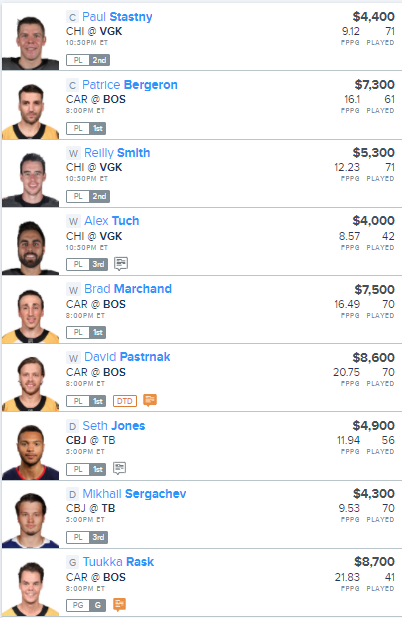 The NHL playoffs are through their seeding round and now we are ready to go as we have 16 teams left fighting for Stanley Cup!

Let us look at our FanDuel lineup which features a 4-game slate and starts at 3:00pm!

The top matchup to focus on tonight will be the Las Vegas Knights vs. the Chicago Blackhawks.

The Knights were outstanding during their round-robin games, which they were a perfect 3-0, earning them the top-seed in the Western Conference.

The Knights had no trouble finding the back of the net in those three games as Las Vegas averaged 5 goals per game and I expect that to continue agianst the Chicago team that despite upsetting Edmonton, still allowed the Oilers to average 3.75 goals per game.

For the Knights, I am going to go with some value and roster Paul Stastny, Reilly Smith, and Alex Tuch.

Unlike the Knights, the Boston Bruins had a terrible round-robin dropping all three games and despite having the best record in the NHL coming into the bubble, is now the 4-seed in the Eastern Conference.

Despite their troubles, I think this is a perfect time to jump on the Bruins as I expect much better performances, especially from their top line, now that these games have more meaning.

The top line of Patrice Bergeron, Brad Marchand, and David Pastrnak struggled, but there is no doubt that they are arguably the top line in the NHL and as I expect ownership to be a bit lower due to recent basis, I’m happy to stack all three tonight.

Staying with the Bruins, as I expect a strong offensive output tonight from their top line, I’m going with Tuukka Rask in net.

Rounding out our team, for our defenseman, we are going with Seth Jones of the Columbus Blue Jackets and Mikhail Sergachev of the Tampa Bay Lighting.

Seth Jones averaged about 30 minutes of ice time during their match-up against Toronto and as I expect him to see the similar amount of time, I think he has nice value at $4,900.

Victor Hedman is still currently a game time decision for the Lighting, but even if he does play, I do not see him getting normal minutes as he has looked a step slow since the games restarted. Sergachev should benefit from this and as he did have 10 goals & 24 assists on the season, I think he is a nice play at $4,300.