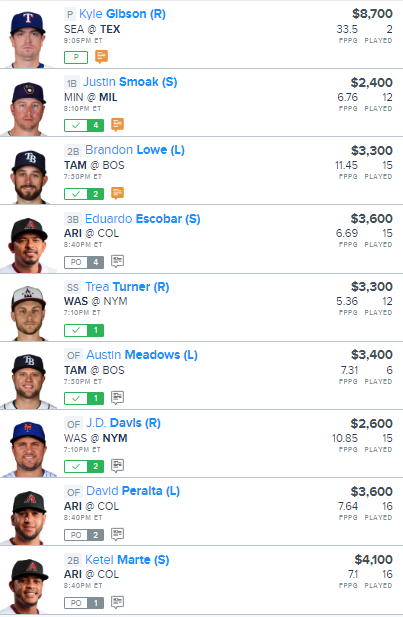 We are on to our MLB lineups for the day and let us look at our FanDuel MLB Lineup which features a 9-game slate and starts at 7:10pm.

Not too much weather to worry about today. There will be some storms rolling in late for the CWS/DET game, however, it looks like there won’t be much trouble until about 9:30/10:00pm.

On the mound tonight, although I don’t love spending up generally for the Rangers Kyle Gibson especially when he is the 2nd most expensive pitcher on the slate, I think that is the play tonight as we love the fact that Texas will let him throw 100-110 pitches and that he has a nice match-up agianst the Seattle Mariners.

We are going with a 3-man Arizona stack vs. Jon Gray at Coors Field with Eduardo Escobar, David Peralta, and Ketel Marte.

I like Tampa Bay tonight and going to roster two of their LHB’s in Austin Meadows & Brandon Lowe.

Justin Smoak is coming off his best game of the season (3 for 5 w/ 2B, 2 RBI’s, R) and I like his value tonight hitting cleanup for Milwaukee.

I’m paying up for Trea Turner in his matchup agianst the LHP Steven Matz as Matz can be prone to HR’s.

The Mets have a tough match-up agianst Patrick Corbin, however, a few Mets have had success agianst him and one of them is the RHB J.D. Davis. Davis has been outstanding this season, hitting .327 w/ 3 HR’s and I like his chances to go yard tonight.