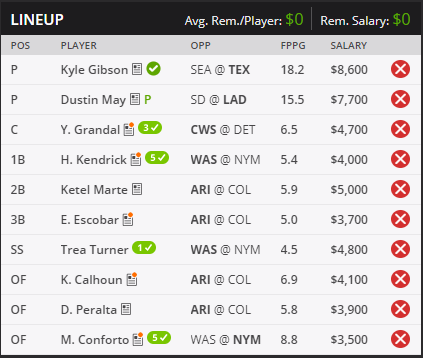 We are on to our MLB lineups for the day and let us look at our DraftKings MLB Lineup which features a 9-game slate and starts at 7:10pm.

Not too much weather to worry about today. There will be some storms rolling in late for the CWS/DET game, however, it looks like there won’t be much trouble until about 9:30/10:00pm.

On the mound tonight, we’re going to be going with the Rangers Kyle Gibson and Dodgers Dustin May.

Kyle Gibson is not a pitcher I normally love to pay up for, but he has two things going for him tonight in the fact that Texas will allow him to throw 100-110 pitches and that he has a great matchup agianst Seattle.

Dustin May was outstanding at San Diego in his last start (6 IP, 2 ER, 8 K) and I think he repeats that performance at home against the Padres tonight.

Yasmani Grandal has struggled this season, but I’ll pay up for him tonight as I like the LHB’s of the White Sox against Michael Fulmer.

We are going with a 4-man Arizona stack vs. Jon Gray at Coors Field with Ketel Marte, Eduardo Escobar, Kole Calhoun, & David Peralta.

I’m paying up for Trea Turner and going with some value in Howie Kendrick in their matchup agianst the LHP Steven Matz as Matz can be prone to HR’s.

The Mets have a tough match-up agianst Patrick Corbin, however, a few Mets have had success agianst him and one of them is the LHB of Michael Conforto. In 22 AB’s vs. Corbin, Conforto is 8 for 22 (.364 average) with 5 HR’s.

Here is our MLB DraftKings lineup: