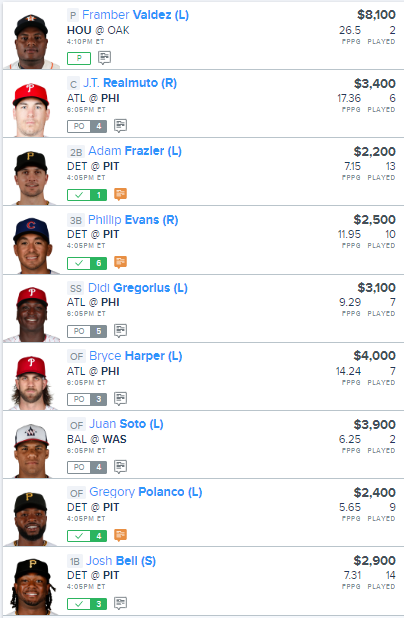 Hope everyone is enjoying their weekend!

I’m going to take a shot at today’s FanDuel “Early Only” contests that features 4 games and starts at 4:05pm!

We’re going to be paying up for the Houston’s Framber Valdez in his match-up agianst Oakland. Valdez has looked solid so far this season and is coming off an impressive outing agianst the Los Angeles Angels in which he went 6.1 IP while giving 0 ER’s and striking out 8.

On the offensive end we’re going to be stacking the Philadelphia Phillies and Pittsburgh Pirates.

Philadelphia will be up agianst Atlanta’s Kyle Wright who over his 31.2 IP in his MLB career, has posted a 7.67 ERA & 1.989 WHIP. Write is currently allowing his opponents to hit .346 against him and has allowed the current Philadelphia lineup to post a 1.192 OPS agianst him.

For the Phillies, we’re going with a 3-man stack of J.T. Realmuto, Didi Gregorius, and Bryce Harper!

Pittsburgh & Detroit went off offensively last night and I’m banking that the Pirates do so again today agianst the veteran Ivan Nova of the Tigers. Nova is long past his prime and although he pitched well agianst the Kansas Royals in his last outing, I expect him to be roughed up a bit today and allow at least 2 HR’s.

For the Pirates, we’re going with a full 4-man stack of Adam Frazier, Phillip Evans, Gregory Polanco, and Josh Bell.

Rounding out our offense, we’re going with Washington’s Juan Soto!