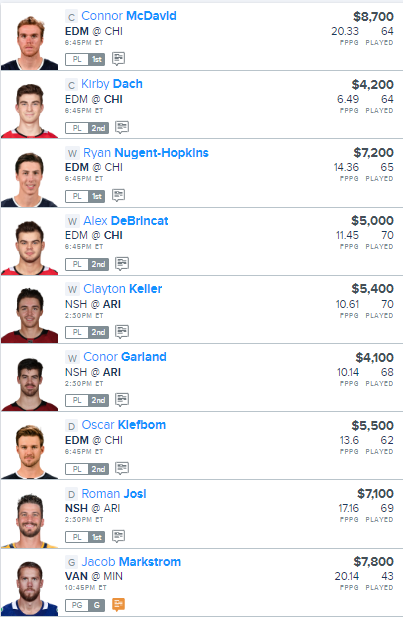 It’s Friday and I am pumped for another full day of sports! Let us kick off our lineups as we take look at our FanDuel NHL lineups that features a 5-game slate and starts at 2:30pm.

Looking at the matchups today it is hard to ignore the Edmonton Oilers/Chicago Blackhawks game which features the Oilers facing a must-win game tonight.

Currently, both these teams have the highest implied scoring totals on the slate (Edmonton: 3.5; Chicago: 3.1) and so far over the three games, we have seen 26 total goals.

For the Oilers, we’re going to be paying up for what should be the most popular stack of the night in Connor McDavid, Ryan Nugent-Hopkins, and Oscar Klefbom. This trio is averaging 72.0 FanDuel points between the three of them throughout this series and as I expect a big offensive night from the Oilers so they can stay alive in the playoffs, I have no problem spending up for this trio tonight.

Staying in this match-up, we’re going to get some nice value from the Blackhawks 2nd line in Kirby Dach & Alex DeBrincat.

Dach has some of the best value on the slate as he plays on a dangerous line that includes both DeBrincat and Patrick Kane and you have to love the fact that he saw over 23 minutes of ice time in his last game. On top of that, he also has been playing with the top power-play unit so at his price, I think he is almost a must play.

DeBrincat has been averaging about 13.0 FanDuel points per game during this series and has shown his ability to have some big games as he comes into this matchup with 18 goals & 27 assists.

I needed some value to fill out our last two W positions and I am going to be looking at the Arizona Coyotes. Arizona isn’t the highest scoring of teams this season, but the match-up is great as Nashville and they’ve been able to find the back of the net 10 times so far in this series.

I think Arizona continues to have success and I love pairing the 2nd line duo of Clayton Keller & Conor Garland.

Staying in this match-up, I’m going to pay up for Nashville’s Roman Josi as he is arguably the best defender in the league, and I expect him to have a big game to keep Nashville’s playoff hopes alive.

In net tonight, we’re going to go with Vancouver’s Jacob Markstrom who is coming off shutout of the Minnesota Wild on Thursday and I expect another big performance tonight as the Canucks finish their series agianst the Wild.