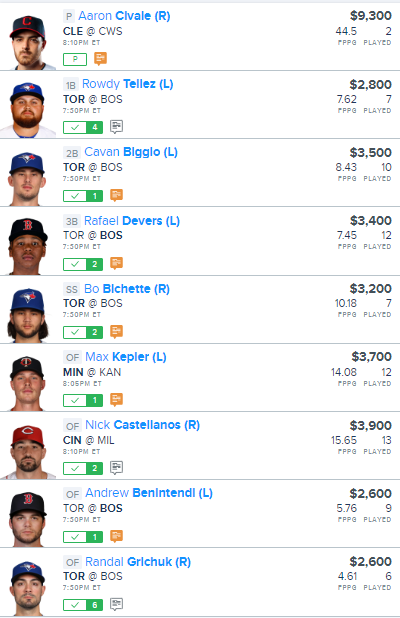 Hope everyone is having a great Friday!

We are on to our MLB lineups for the day and let’s take a look at our FanDuel MLB Lineup which features a 13-game slate and starts at 7:05pm.

Does not look we really have any weather concerns tonight so feel free to fire up anyone on the slate!

On the mound tonight, we’re going with Cleveland’s Aaron Civale in his match-up agianst the Chicago White Sox.

Civale has been outstanding in his first two starts this season as he comes into this match-up with a 3.75 ERA while compiling 18 K’s in just 12.0 IP. We saw another RHP, Josh Lindblom, have success with K’s last night agianst the White Sox and with Civale solid control, I think he certainly have an opportunity to get up to double-digit K’s tonight.

On the offensive end, we are going with a 4-man stack of the Toronto Blue Jays in their match-up against Ryan Weber of the Boston Red Sox. Weber has really struggled this season as he is coming into this game with a 11.57 ERA in his 7.0 IP while allowing his opponents to post a .345 average/1.253 slugging percentage against him.

Staying in this match-up, I’m going to be going with Boston’s Rafael Devers & Andrew Benintendi who I think break out of their early season slumps in a good match-up agianst the RHP Tanner Roark of the Toronto Blue Jays.

I’m going to go with Nick Castellanos who has always had great success agianst LHP.

Rounding out the team, we’re going with Minnesota’s powerful leadoff hitter in Max Kepler in his nice match-up against the HR-prone Jakob Junis of the Kansas City Royals.