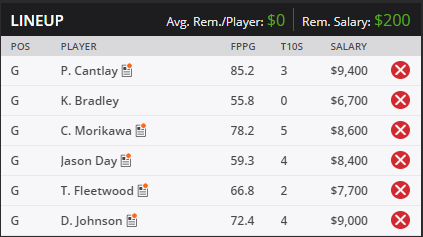 It’s Wednesday night which means it’s time to shift our focus to the PGA!

We have the first major of the season the PGA Championship which will be taking place at TPC Harding Park in San Francisco, California. TPC Harding Park is par 70 that is listed at about 7,200 yards, however, is going to be playing longer this week as the weather looks like it’s going to be on the colder side of things with some solid winds throughout the tournament.

DON’T FORGET TO CHECK OUT OUR FANDUEL PGA LINEUP!!!

Let’s take a look at our DraftKings lineup.

Unlike our FanDuel lineup, we’re not able to squeeze in the trio of Xander Schauffele, Patrick Cantlay, and Collin Morikawa, however, we are going to get both Cantlay and Morikawa in our lineups.

We could get Schauffele in there if we really wanted to, however, I just love the value that Dustin Johnson, Jason Day, and Tommy Fleetwood have.

Dustin Johnson has been boom-or-bust since the restart, however, I like his distance for this course and he certainly has value at just $9,000,

Jason Day has been on fire as of late and is another golfer that has top-5 talent that is priced at just $8,400. Day has finished his last three tournaments T-6, T-4, & T-7 and I think that trend can continue this week.

Tommy Fleetwood hasn’t been sharp in his last two tournaments, however, he is way to talented to be priced at just $7,700.

Rounding out the team, I’m going with my guy in Keegan Bradley. Bradley is a former PGA Champion and although he has not finished high on the leaderboard as of late, he has been consistently making cuts over the last month. Keegan is an accurate driver and has great irons which is critical this week for success.